Going to the Urban Cowboy Reunion Concert at the Renfro Valley Entertainment Center in Mount Vernon, Kentucky was just so exciting! Getting to interview Mickey Gilley and Johnny Lee prior to the concert was super fun and just a thrill. If you had told me back when I was 18 years old and walking out of the movie theater after having just seen the movie Urban Cowboy that I was going to be able to interview these two entertainers one day, you would have blown my mind! 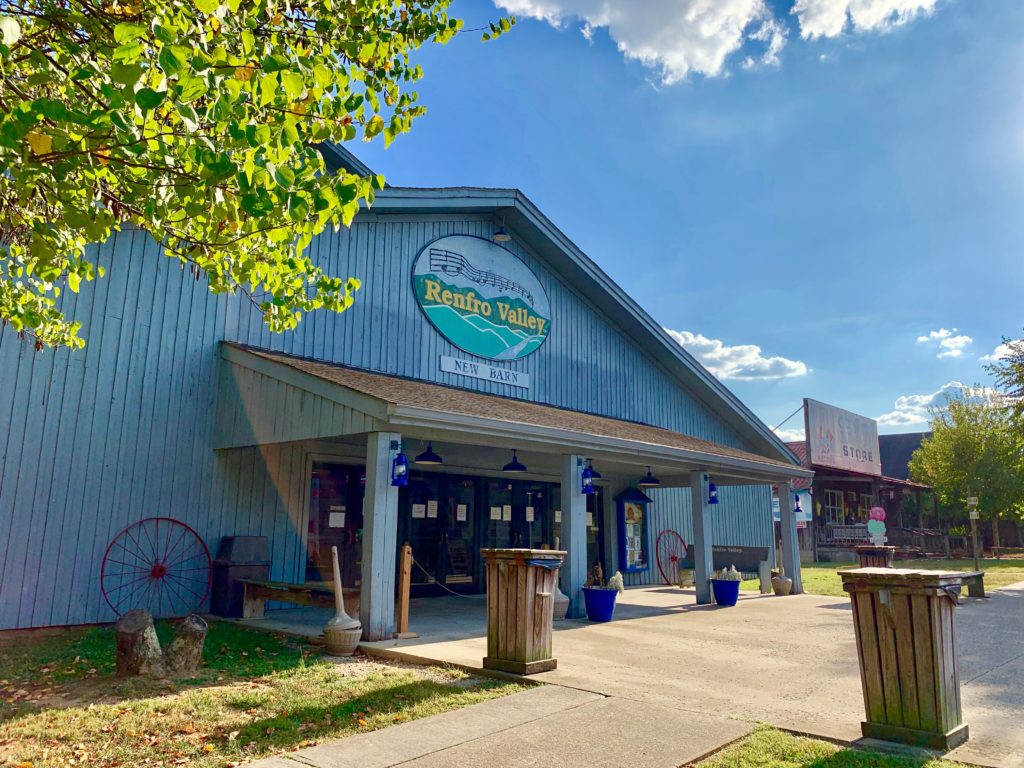 Both Mickey Gilley and Johnny Lee were so gracious with their time by allowing me to chat with them. Both of these guys are so and warm and kind-hearted. They enjoy kidding around, reminiscing, and are passionate about still putting on a good show for their fans. What legendary entertainers they are!

After chatting with Mickey on the phone on my way to Kentucky, he told me we could talk on his tour bus. He said “You can’t miss my bus. Just look for me with my leg up in the air!” Okay, Mickey!! Just the fact that I was able to call him on his phone, and chat after he answered the phone with an energetic “Mickey Gilley!” was so exciting! I couldn’t wait to see him! I was able to meet Mickey Gilley on his tour bus on the afternoon of his show. As I walked up on the bus, he was all settled in waiting for me. I shook his hand and he began serenading me with his song “Room Full of Roses” as he held my hand. Well, how lovely THAT was! Oh my goodness, I could listen to Mickey sing all day long!! Especially to ME! 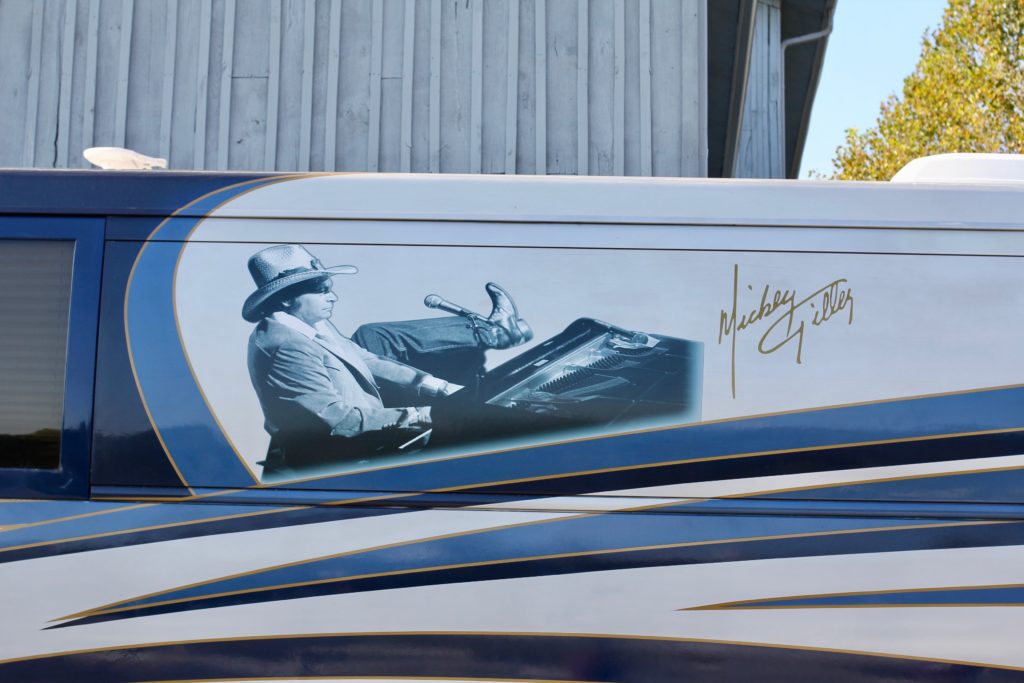 Mickey was such a delight to speak with and so easy to get along with. He is so friendly and enthusiastic. When I finally dragged myself away from him, I felt as though I had gained a friend. My husband and I thoroughly enjoyed chatting with Mickey and meeting some of his band members, his backup singers The Urbanettes as well as his sweetheart Cindy. Everyone is so incredibly nice and they honestly seem to enjoy each other when being on stage. What a talented bunch! Mickey mentioned to me how much he wants his band to sound like his recordings when they play. Well, they certainly do! It’s been a long time since I’ve seen and heard the steel guitar being played. The Urban Cowboy Band is phenomenal! 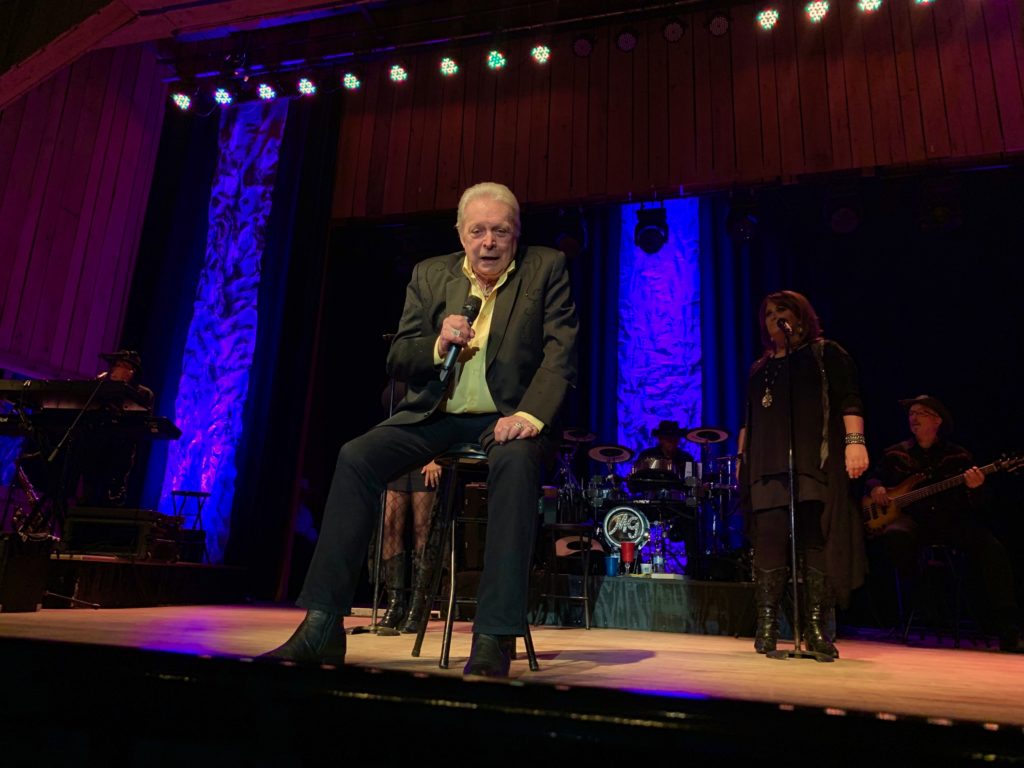 Having grown up as cousins with Jerry Lee Lewis, Mickey mentioned how he saw Jerry Lee perform back when Mickey was working construction. During that performance, Mickey thought “I could do that!”. He thought making more than $1.25 cents an hour doing something fun would be a good alternative for him. Mickey struggled through the ’60s trying to make it big in his own right. The ’70s began to look up for him with the opening of Gilley’s, a Honky Tonk Club in Pasadena TX, and well, the ’80s were when it took off big! The making of Urban Cowboy with John Travolta helped an updated version of country music, two-stepping along with the Cotton-Eyed Joe and western wear skyrocket. Mickey Gilley and Johnny Lee were riding the high with great hits. And country music was getting a lot of attention. 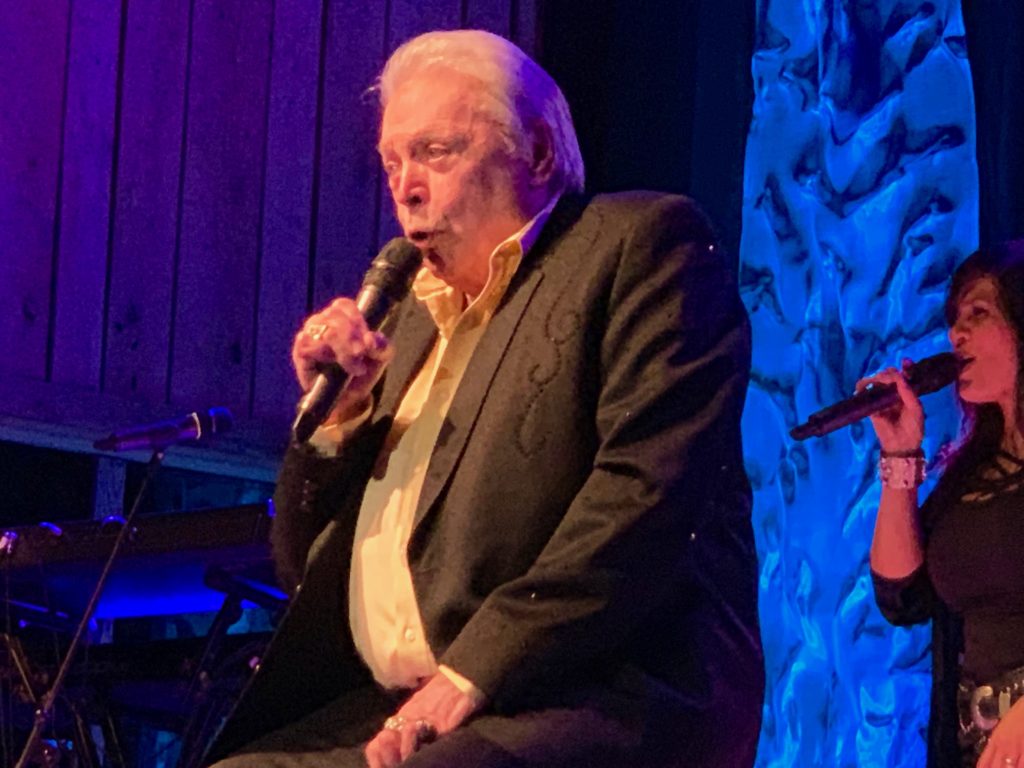 One of the things Mickey told me is how much he enjoys flying. An avid flyer but due to various health issues, he has been unable to maintain his medical certificate and therefore unable to fly solo anymore. But Mickey has a very close friend Cliff, who is a pilot. He pals around with Cliff and is able to enjoy flying with him. Aren’t good friends priceless and such a blessing? 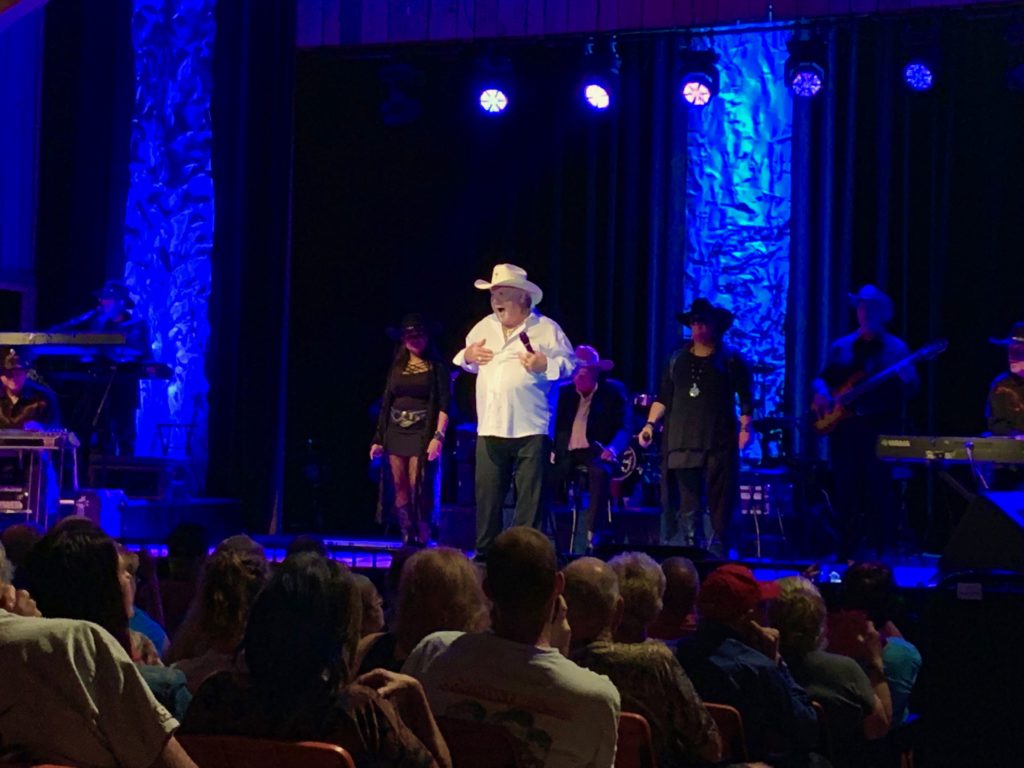 Johnny Lee was so kind and warm-hearted as I got to know him during our interview. Johnny told me about his tour in the Navy during the Vietnam War. He told me that the Navy was his choice only because when he first walked into the Marine Corps Recruiters office, the MC Recruiter was out to lunch. So he walked across the hall to the Navy office and joined up! Johnny mentioned that the Navy most likely saved his life because his tour in Vietnam Nam was on a ship. 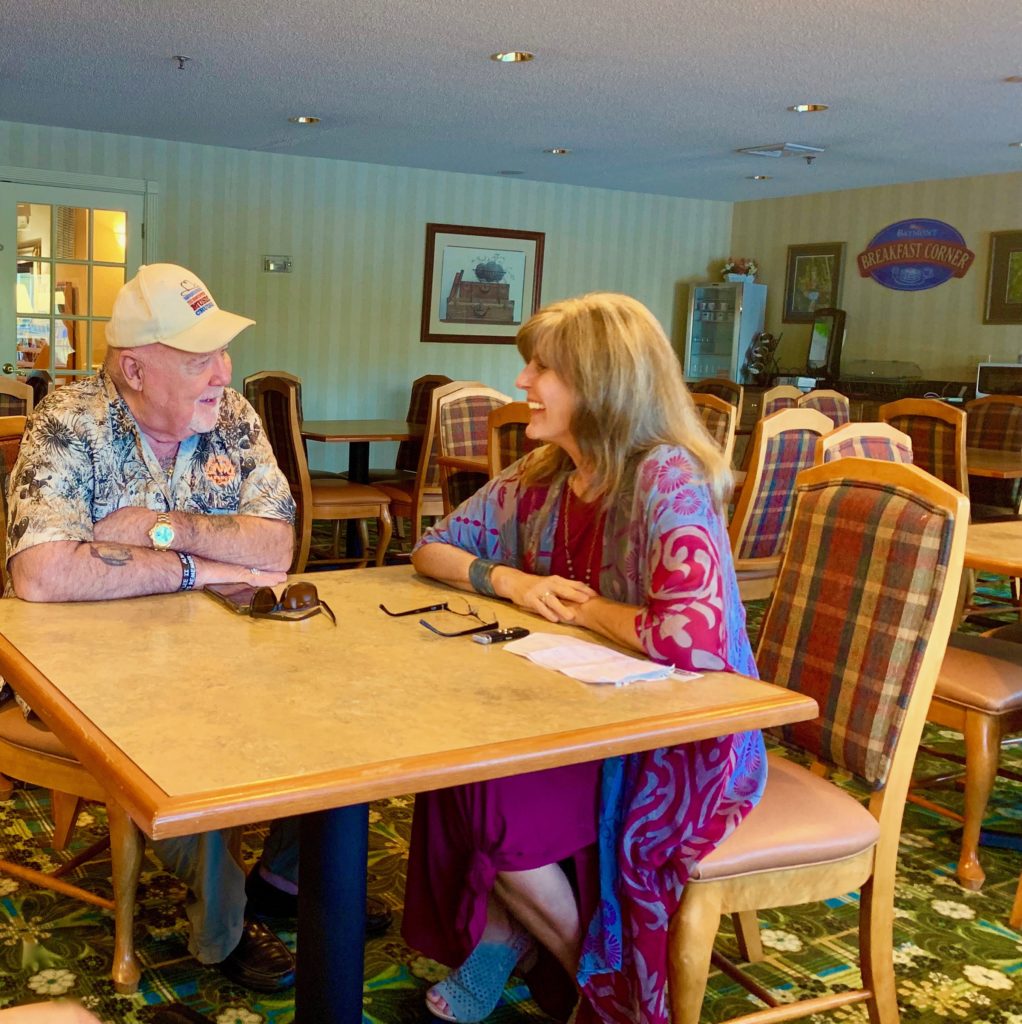 Johnny lights up when he talks about his daughter Cherish and his three-year-old grandson. He is just so proud of both of them. Cherish has written a song about her Dad and it will be released very soon. I asked Johnny if he cried when he first heard it….he did. Johnny asked me if I knew he lost a son to a drug overdose. I did not know that and I could tell how deeply affected this Dad was about losing his only son. Johnny wears two bracelets “Always Remember Johnny Lee II” on his right arm. How heartbreaking to lose a child. Johnny comes alive on the stage performing. You can tell that the stage is his home, where he feels very comfortable. The hits go on and on and I could honestly listen to Johnny Lee sing for days!

Johnny Lee and his daughter Cherish

Having listened to hit songs like ‘Room Full of Roses’, ‘Stand By Me’, ‘You’ve Really Got a Hold on Me’, ‘Here Comes The Hurt Again’, ‘Don’t the Girls All Get Prettier at Closing Time’, ‘You Could’ve Heard a Heartbreak’, Lookin’ For Love’, ‘Yellow Rose of Texas’, ‘Cherokee Fiddle’, ‘Prisoner of Hope’ and SO many more for so many years, it was exhilarating to hear them performed in person.

I asked Mickey if he had a sound piece of advice to give someone, what would it be. He said to never try to be someone you aren’t. He mentioned being genuine and not pretend you are something you aren’t. Good advice coming from the Academy of Country Music Award Winner for Entertainer of the Year in 1976.

I also asked Johnny if he could give someone a good piece of advice what would it be. He said to “just be yourself”. Such great advice from both of them! And how funny that as I spoke to both guys separately, they pretty much gave the same advice. Johnny did say they “were like brothers”. 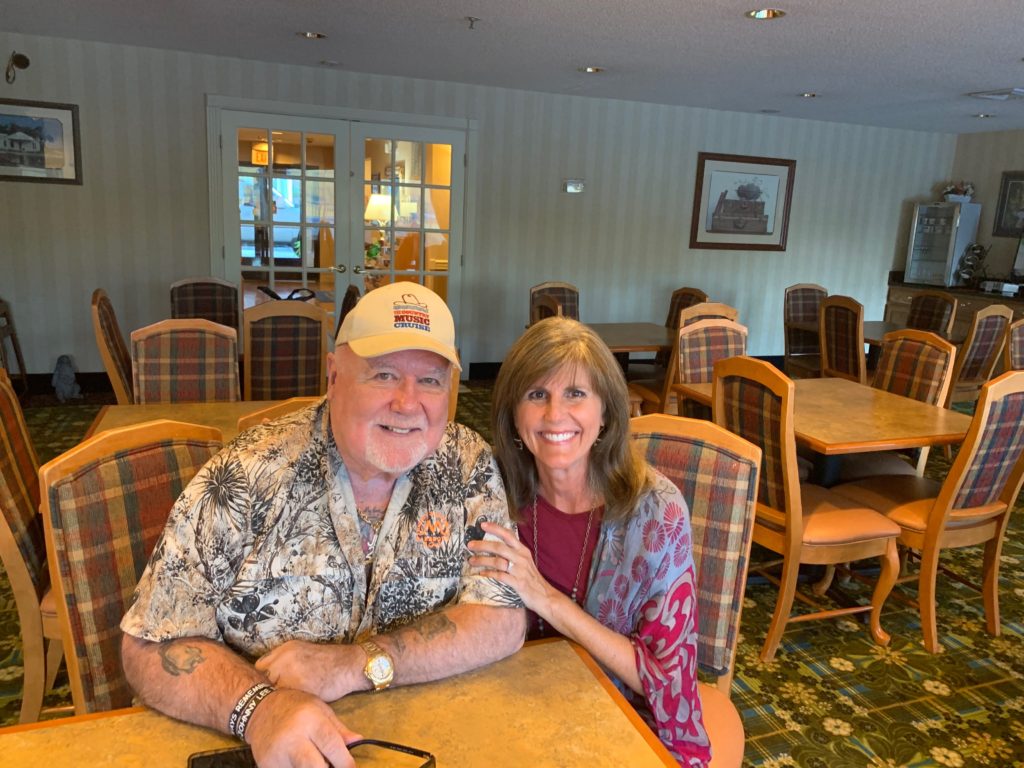 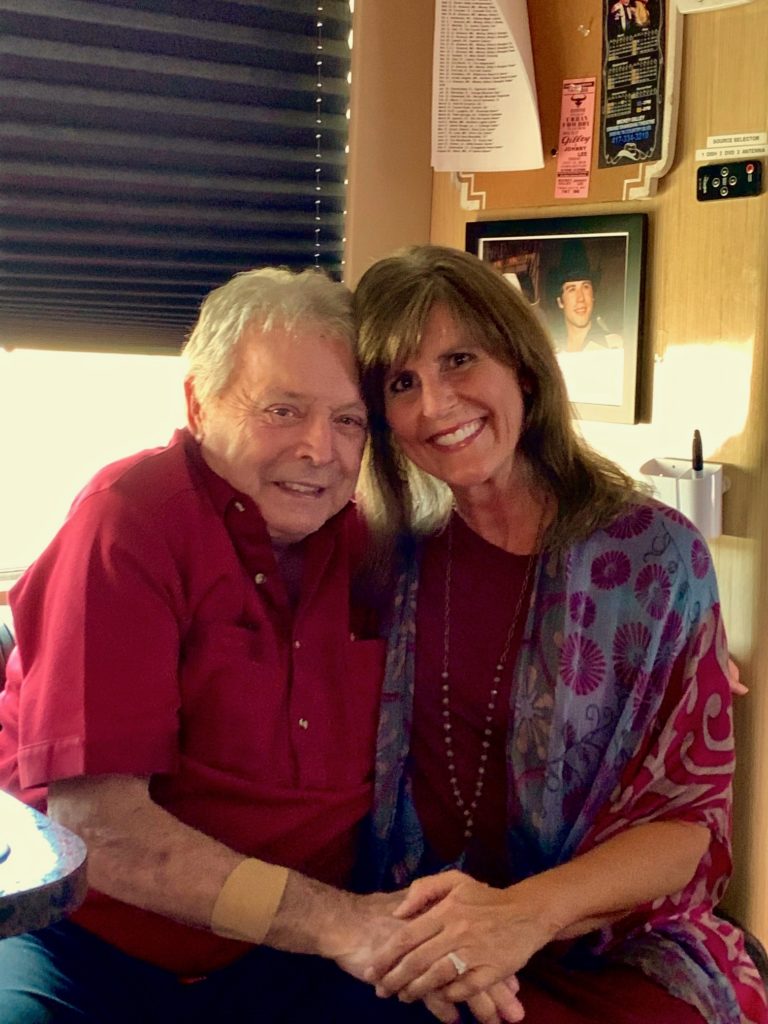 Mickey Gilley and Me! Photobombed by John Travolta!

Thank you Mickey and Johnny for being so incredibly kind-hearted and genuine to both myself and David. Thank you for being so generous with your time! I appreciate you both so much. Classic Country Music is my all-time favorite genre of music. When I hear each of you sing, I soak it all in as it takes me back to the 80’s and simpler times. Your voices are still as inspiring and strong today as they were back then. Thank you for putting on quite an entertaining show of almost 2 hours of music at Renfro Valley. It was fantastic! You guys are two of my favorites and I love you both even more now that I personally know you. I can’t wait to see y’all in concert again! Praying blessings for you both.

Where to Eat: Back Porch Smokehouse, Mount Vernon KY (Delicious food with a gorgeous view)