Lake Placid, Home of the 1932 and 1980 Winter Olympics was the perfect Adirondack Mountains setting for the 2019 World Cup Bobsled and Skeleton Competition. Lake Placid New York is a homey and welcoming small-town ready for events with big crowds. Everywhere you turn is a sight for sore eyes! My cousin Ann and I had an incredible time. You can make Lake Placid as action-packed as you’d like or just a place to chill out. We chose to be extremely active, as you will see! It was exhilarating………. 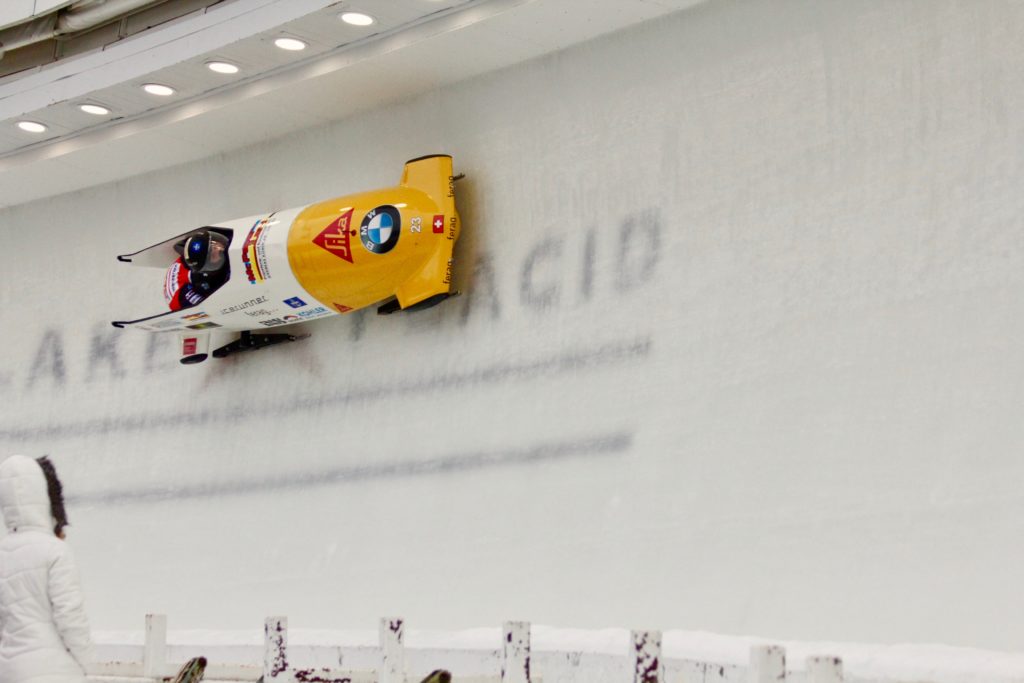 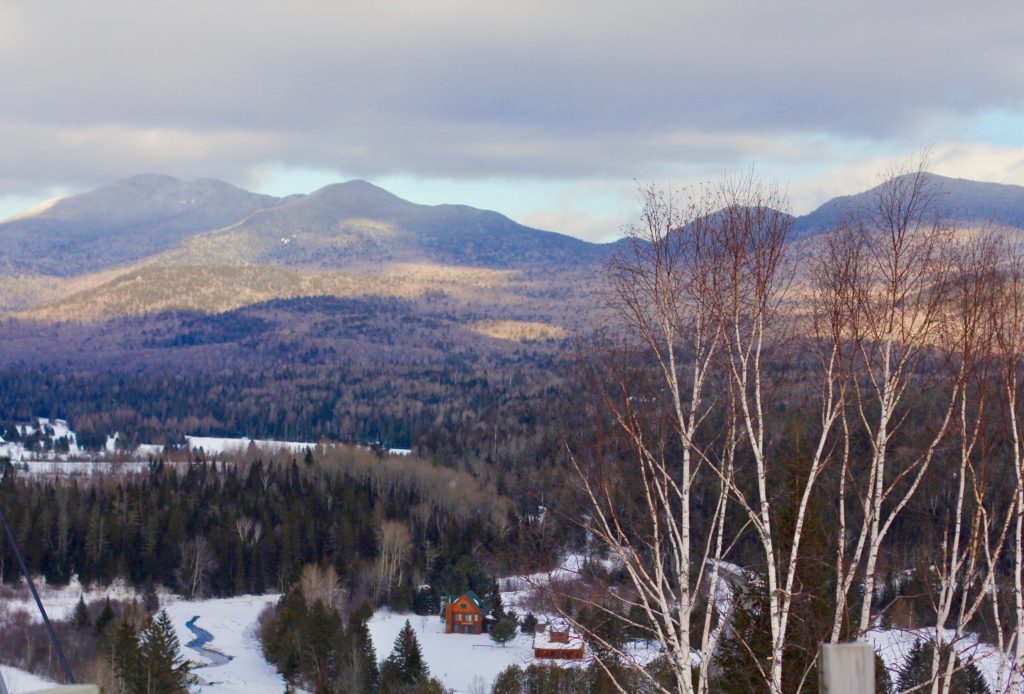 Just look at this breathtaking view. We were in awe as we stood far above the ground taking in this scenery.

Psalm 95:4-5 In His hand are the depths of this earth, and the mountain peaks belong to Him. The sea is His, for He made it, and His hands formed the dry land. 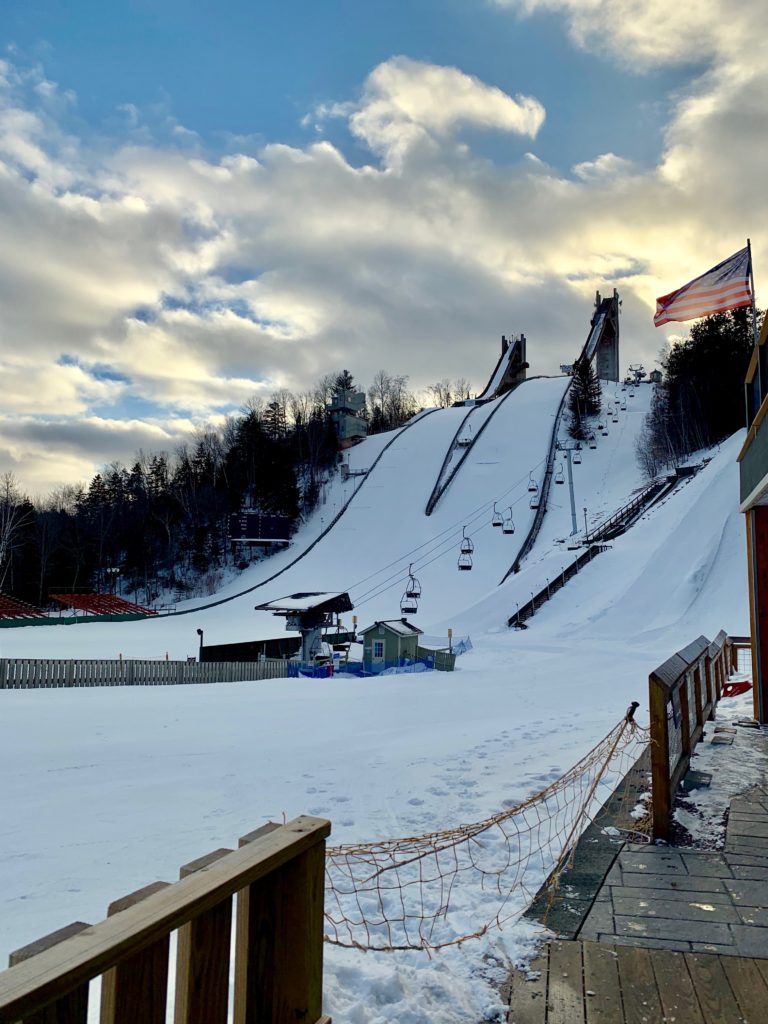 We rode up to the very top! The chairlift and elevator rides were FREE, included in our Olympic Sites Passport. Can you imagine skiing all the way down and then taking flight?! Absolutely terrifying to me! Notice the red bleachers for spectators on the far left-middle of the image? More info is below on the Olympic Sites Passport.

The locals in Lake Placid are just as nice as can be when you are out and about, whether you are shopping, skating, tobogganing, or being a goofy tourist. We had a ball while we were there and I can’t wait to share it all with you! This video is from the Olympic Oval in Lake Placid. Both outdoor Speed Skating Events from the 1932 and 1980 Winter Olympics took place on this oval. Speed Skater Eric Heiden won 5 Gold Medals here at the 1980 Winter Olympics! So cool and very impressive!!!

We stayed at Art Devlin’s Olympic Motor Inn It is a great value of $150 per night. Comfy beds, very clean with a kind and helpful staff. We left the Inn early each day and plopped into bed each night completely exhausted. From the Inn, we were able to walk down Main Street to the local shops, restaurants, ice skating, toboggan run, Mirror Lake, Olympic Museum, and Hockey Rinks.

The lobby of the Inn has an incredible amount of Olympic memorabilia including Olympic medals. The Inn was originally owned by American Ski Jumper Art Devlin and is now owned by his son.

The Downtown Diner was delicious! It is super convenient and easy to get to by walking from Art Devlin’s Olympic Motor Inn. Even if you can barely walk from the soreness and exhaustion of participating in winter sports! I ordered the Special of the Day, Sweet & Salty: A 3 egg white scrambler with bacon, potatoes, apples, onions, and gorgonzola for $11.99. Completely gluten-free with a side of bacon and a glass of OJ. We were refueled and ready for more walking!

The staff at the Lake Placid Olympic Center as well as all of the Olympic Events are incredibly helpful and nice! I highly recommend purchasing the Olympic Sites Passport. For the bargain price of $35 online, it includes free ice skating on the Olympic Oval (outdoor speed skating rink for 1932 and 1980 Winter Olympics), admission to the Olympic Museum, chairlift and elevator rides to the top of Olympic Ski Jump, discounts to the Be A Biathlete (which includes an all-day cross country skiing trail pass & Biathlon shooting) and the Bobsled Experience (60 mph Bobsled Run ride) and MORE depending on the season. It was a great value!

We made it to Mr. Mike’s Pizza and Italian Restaurant for dinner. David, the Owner was ever-present at the restaurant. He is very knowledgeable about gluten and celiac disease along with cross-contamination. Such a welcoming guy with a warm and caring personality who trains his staff very well! Thank you David for such a fabulous dinner! I felt very comfortable eating there. The gluten-free Margarita pizza ($14) had a wonderful flavor and the warm, roasted vegetable salad (large enough for 2/$6.50) was just delicious. The restaurant is just a mile away from the Olympic Center. It’s so convenient.

While we were there, we met Tyrone Mullings, a Jamaican Bobsledder. What a nice guy with a huge heart. Tyrone was at the Bobsled Run earlier in the day as an Ambassador for Lake Placid as he was escorting a little boy and his family around the Olympic Facility from the Make-A-Wish Foundation. Thank you Tyrone for giving your time and yourself for such a worthwhile organization. Keep an eye on Tyrone as he begins his bobsledding training in October for the 2022 Winter Olympics in Beijing! You can do it, Tyrone!!!! I can’t wait to watch it!

Looking for a fun, family night while at Lake Placid? Locals told us about the Toboggan Chute at Mirror Lake. These toboggans go so fast down a track and then zoom over on top of the 10-12″ thickness of the ice-topped frozen Mirror Lake. $15 adults and $10 students for a night of toboggan excitement. Toboggans are included.

More than a century ago, it began as a training exercise for Norwegian soldiers, which goes a long way toward explaining how cross-country skiing and riflery met. The only sport that involves ski wax and bullets is the biathlon. Lake Placid is one of the few places you can learn about it and experience being a biathlete! Be A Biathlete is a fun activity that includes an all-day cross country ski trail pass, rentals, lesson, and shooting for $55. We loved this experience! It was an incredible workout! 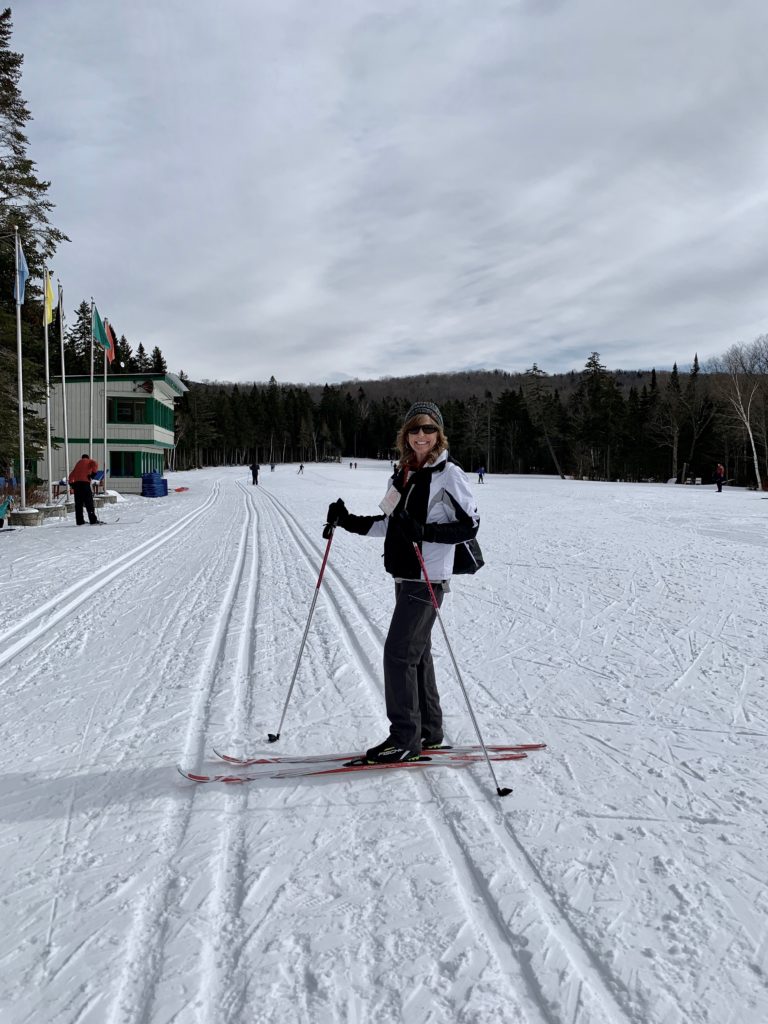 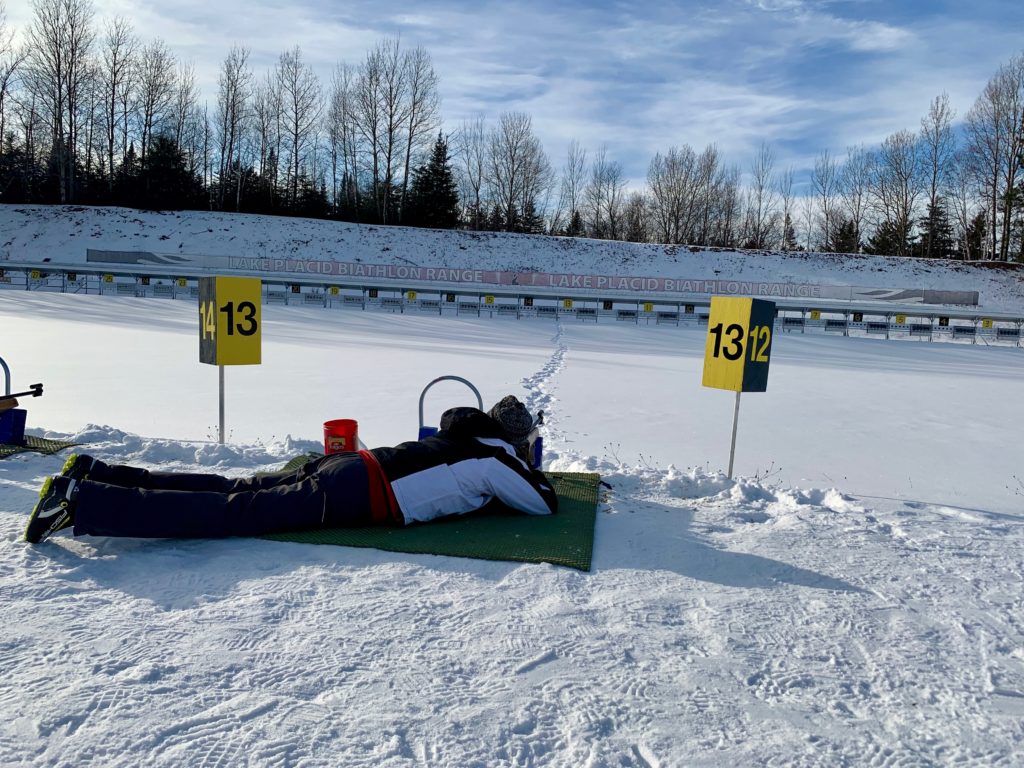 10 out of 10!! Oh yeah! Slight cheating tough….I didn’t have to keep my skis on and the size of the targets was the size the athletes use when in the standing position to shoot! Still….so FUN!! 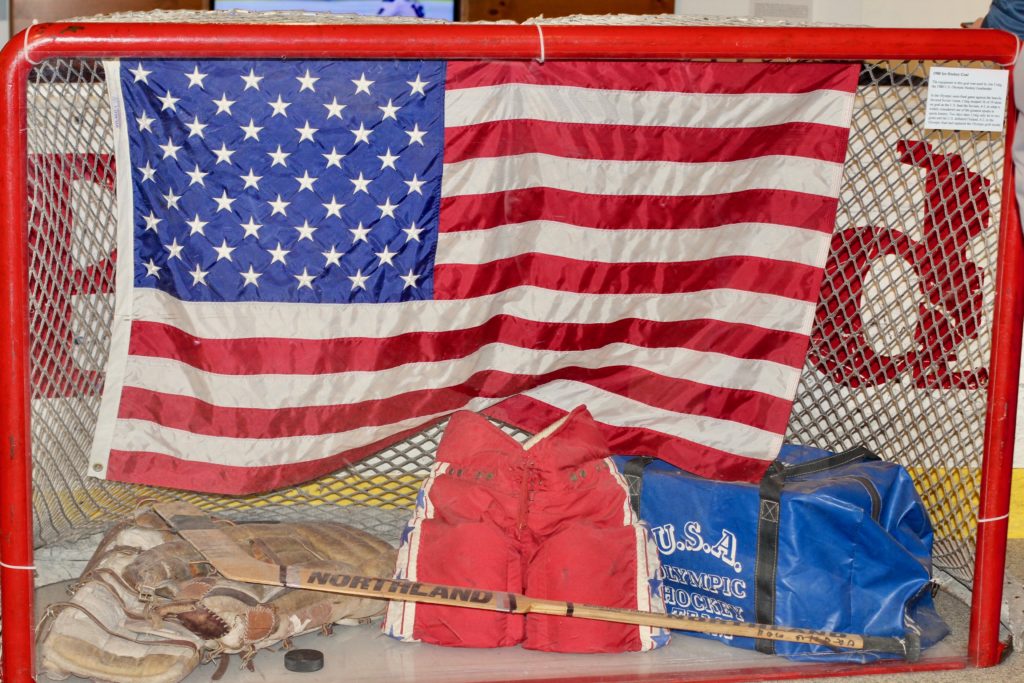 What an experience it is for the local kids to grow up playing on the ice! Especially to be a part of Olympic History, skating at the Olympic Center! Who knows, we just might see these guys playing for the NHL or in the Olympics one day!! Keep working hard guys! It’ll pay off one day! 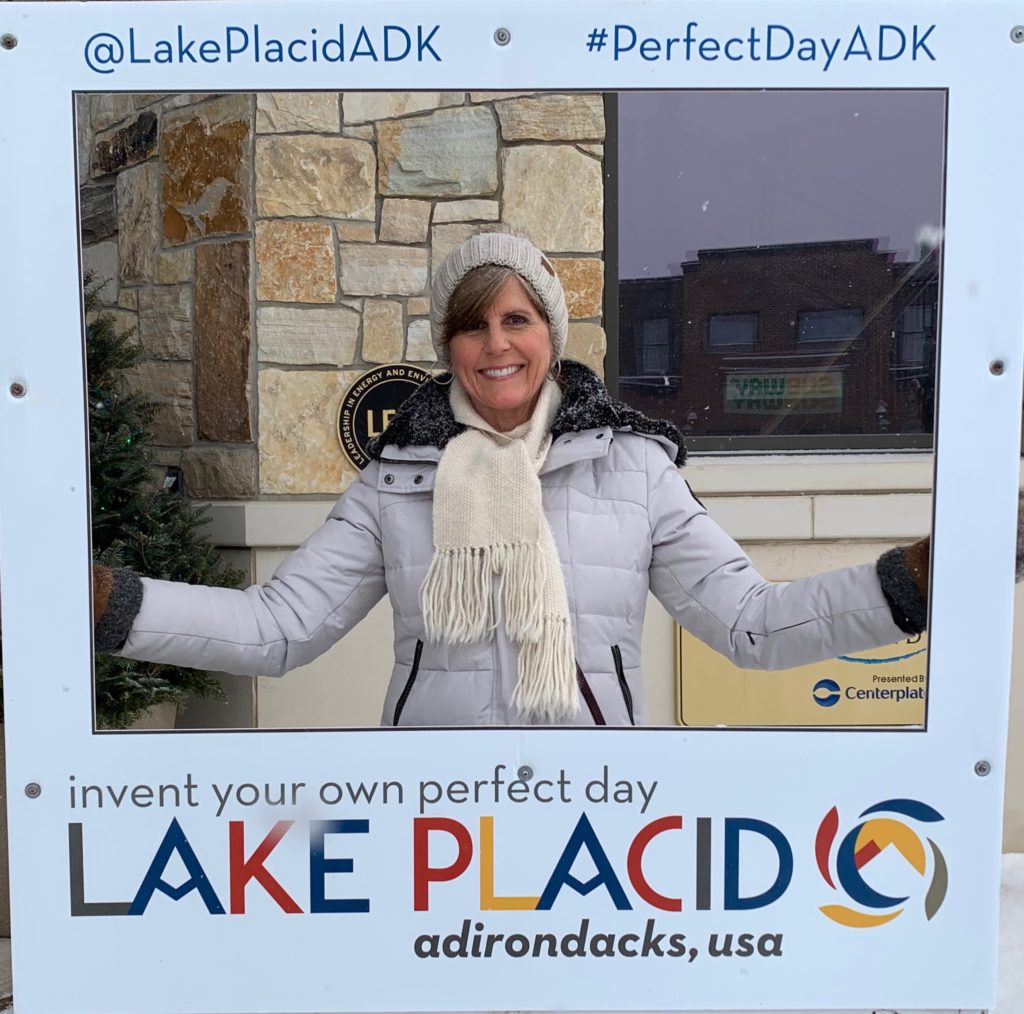 Don’t forget to bring your hat, scarf, gloves, boots, warm layers, down coat, and micro-spikes! Be prepared for the snow, snow showers, single digits, and below freezing temps! Enjoy every. single. minute! It’s just beautiful and so much fun!!!