I reached out to Terry, the Owner of Maui Brick Oven, a 100% GLUTEN-FREE restaurant on the day we arrived on Maui. I was hoping to do a quick interview as well as eat at his restaurant. Terry was so gracious and kind as he responded right back and said I could visit him the next day as he was doing food prep prior to opening. I was thrilled! I didn’t know what to expect, but was super excited to have this opportunity to see behind the scenes!

Maui Brick Oven was featured in April 2017 on Diners, Drive-Ins, and Dives with rave reviews! Maui Brick Oven is a small restaurant and packed with flavorful ingredients used in their tasty menu items. This 100% gluten-free restaurant is a delight. 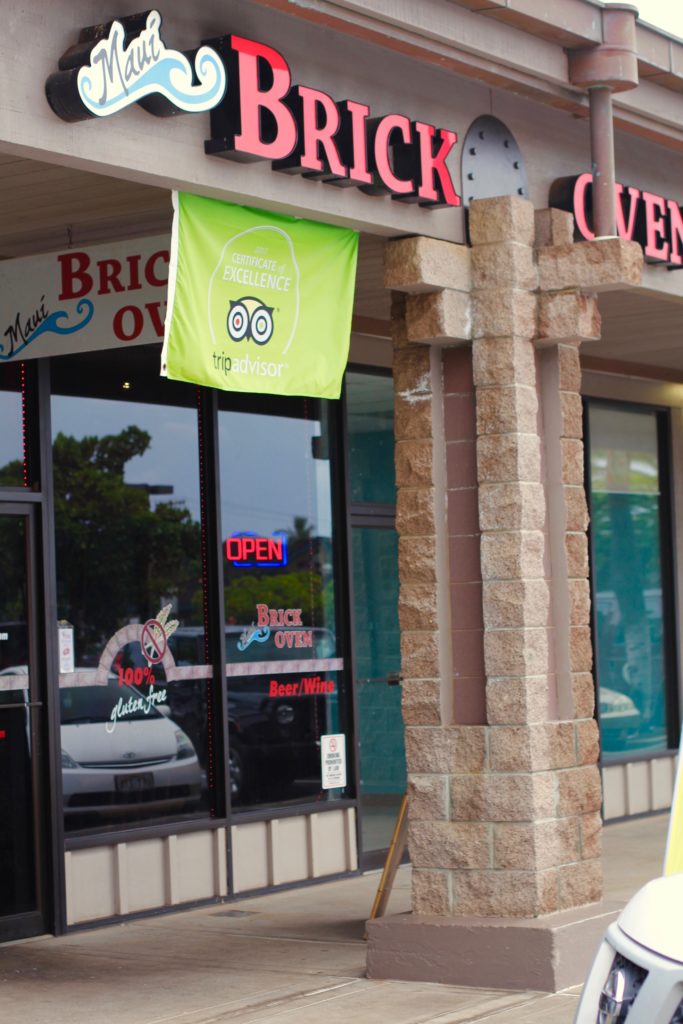 Maui Brick Oven has been highlighted with many awards. This restaurant has received a Certificate of Excellence from Trip Advisor every year since 2014. Google gives them 4.8 stars and Facebook gives 4.5 stars. They have also been awarded the Best of Maui – Kilohana Award. Find Me Gluten Free gives them a 5.0 and so do I!! Wait until you see what they have to offer……….. 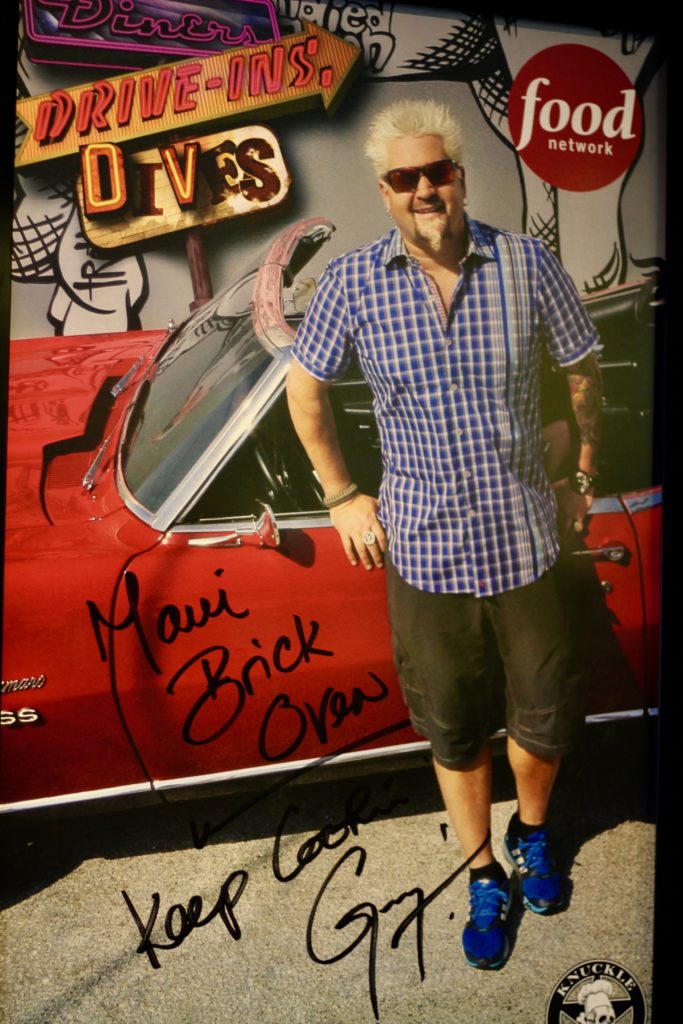 My daughter Kate and I ordered multiple things to try! Well, actually I ordered multiple things because I COULD! Oh my goodness! What an incredible treat to order Beer Battered Fish & Chips, except I subbed Onion Rings for the Chips! And then I also ordered Beer Battered Mushrooms!  First of all, I hadn’t eaten fried fish OR mushrooms for about 16 years!! What an unexpected discovery to be able to have such fresh fish that was caught just the day before right off the coast of Maui! The 2 types of fish served typically are Striped Marlin or Ono. In Hawaiian, Ono means “sweet, very good to eat”. Talk about fresh! It was beyond yummy and was crunchy as the photo implies! 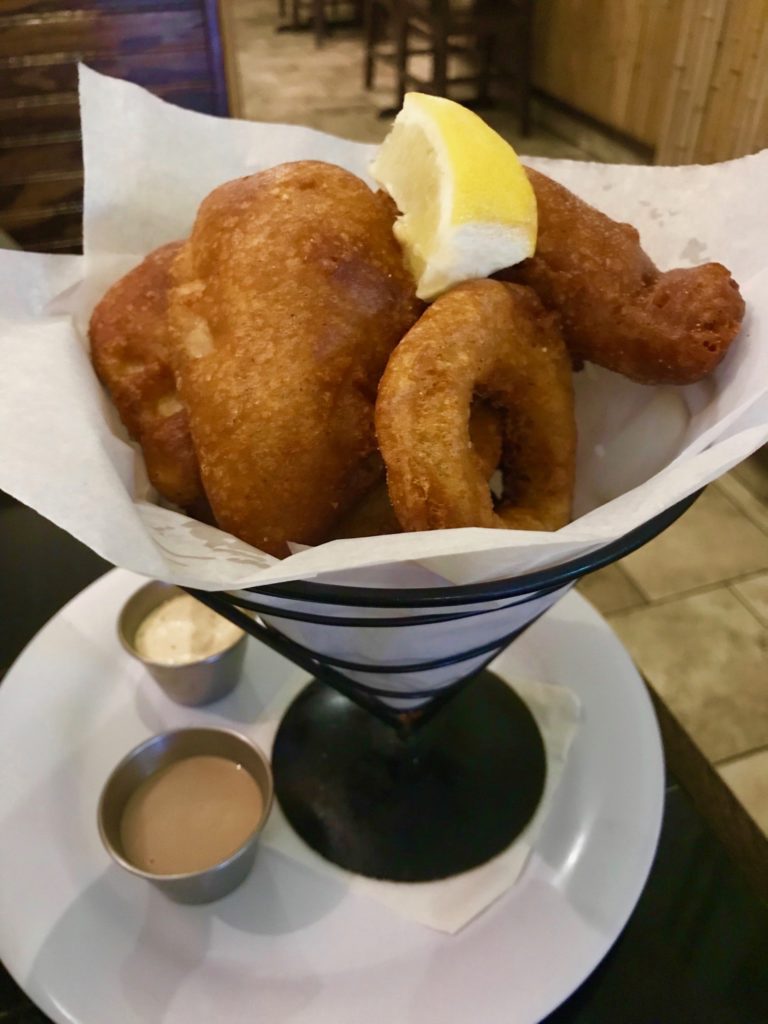 When Guy Fieri with Diners, Drive-Ins, and Dives was filming and tasted the fish, he himself could not believe it was gluten-free! When they stopped filming Guy asked Terry to taste the Beer Battered Fish in front of him to prove it was gluten-free! Well Terry, who has Celiac Disease, obliged and ate the fish because it is indeed completely gluten-free! Guy was so impressed and “blown away” that he mentioned the fish and chips were the best he had ever tasted! And needless to say, I was JUST AS IMPRESSED! It was so good! I admit I overdosed on fried food that evening and enjoyed every bite! A girl has gotta indulge once in a while, especially if it’s been 16 years!!! 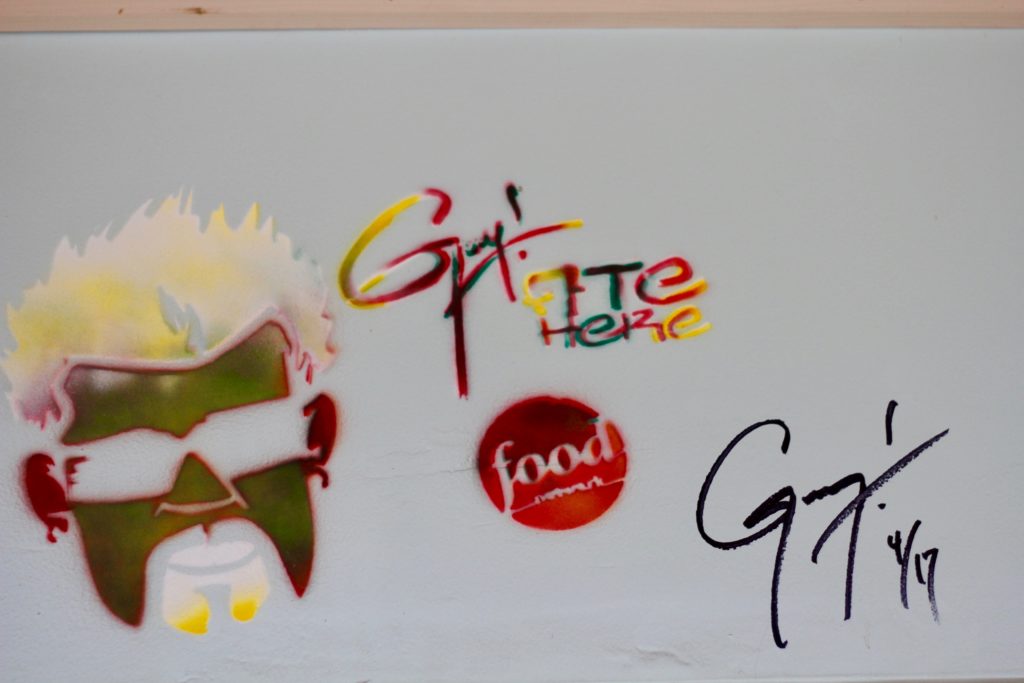 Kate and I also order a pizza, 1/2 Pepperoni, and 1/2 Island Veggie. The pizza crust is made in-house and it is so good! The pizza crust dough recipe is also made into bread loaves, breadsticks, and croutons for the salads! What great ideas!!!! Terry grills the veggies daily before the doors open. They are just perfectly prepared as they are still a bit crunchy and can withstand cooking a bit more in the pizza oven. Vegetables are bought locally and are mostly organic. My pizza was fabulous! Paradise Pesto is their #1 selling pizza. 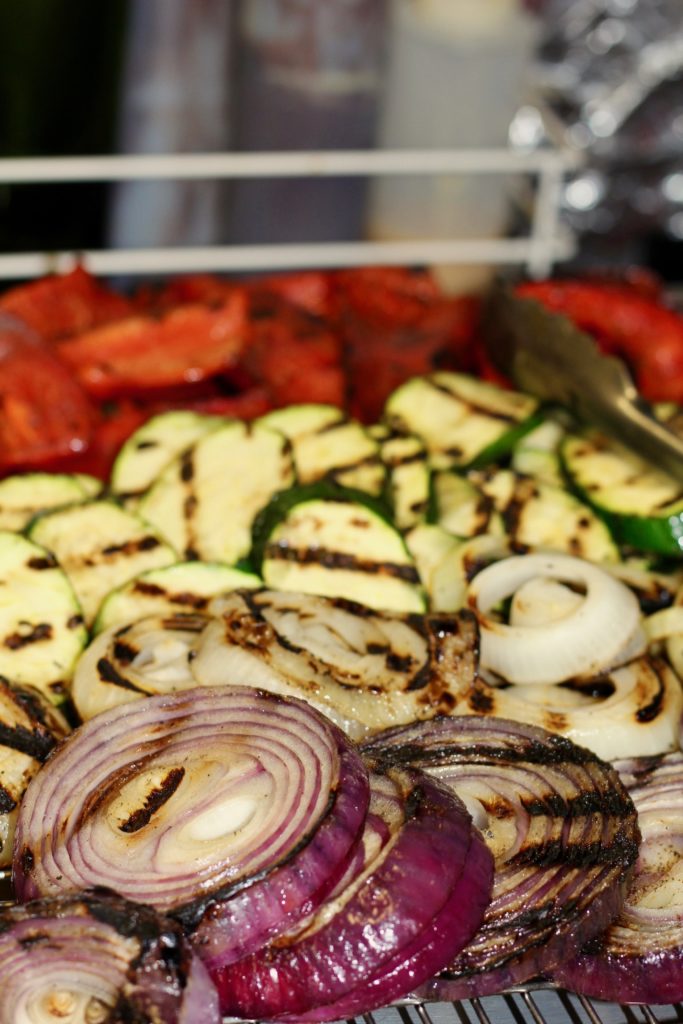 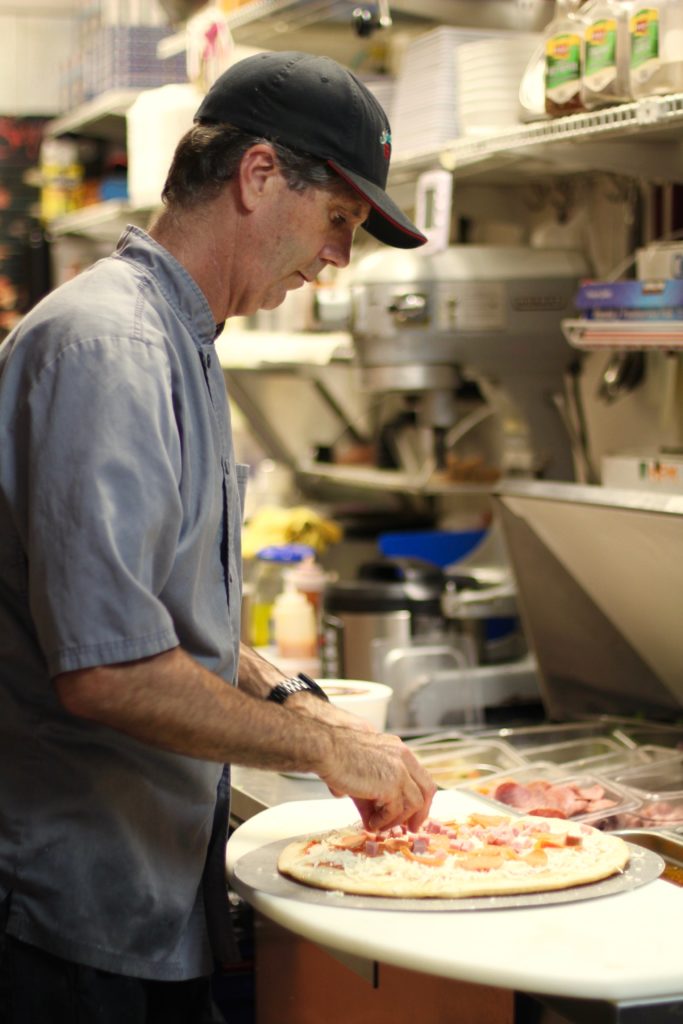 Terry making a masterpiece pizza! How great to order a pizza that is then put in a completely gluten-free oven! No worries of cross-contamination with regular flour flying around. After 50 tries with different pizza dough recipes, they mastered it! When Maui Brick Oven opened up 6 years ago it was the only 100% gluten-free sit-down restaurant in all of the U.S. Now that’s impressive. Wish there were more! 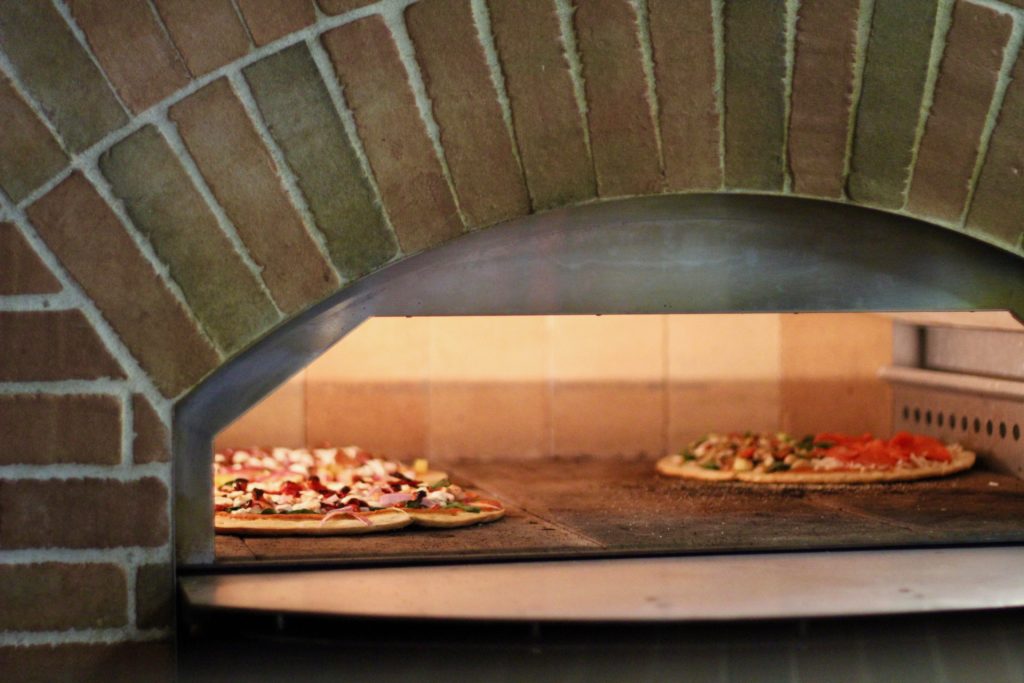 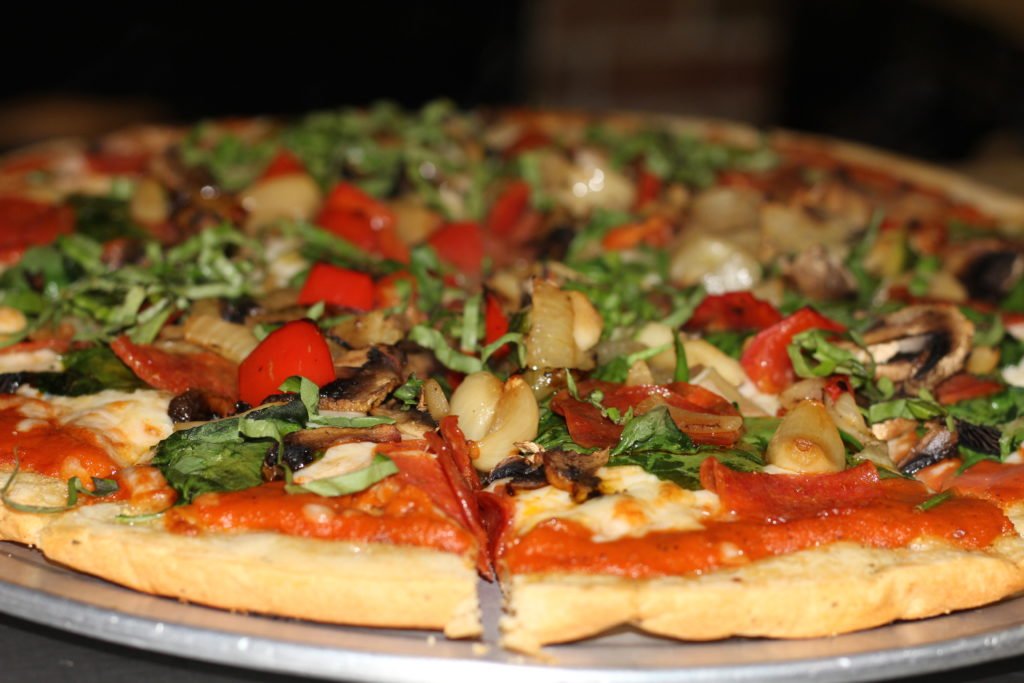 There are so many different gluten-free items to choose from on the menu! How do Homemade Mac and Cheese, Chicken Breasts stuffed with Mango & Goat Cheese, Coconut Shrimp with Sweet Thai Aioli Sauce, Penne Alfredo with Parmesan Breadsticks, Gourmet Rice Bowls with veggies or fruit, AND an extensive dessert menu sound? 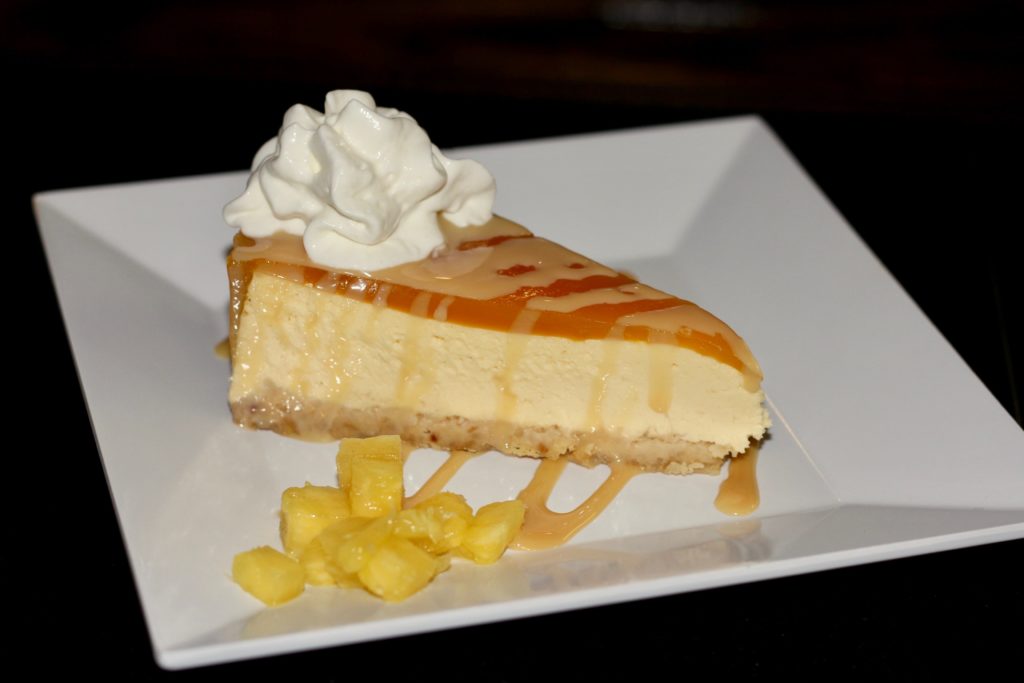 Terry’s son Chad is the Executive Chef and does a bang-up job! Fresh and interesting recipes are his passion. Chad is always coming up with new ideas and recipes. Terry’s daughter Katrina, who also has Celiac Disease, is a server who is one of the most intentional and sweet servers I believe I have ever had. Terry’s wife Leanne is the Front End Manager who is busy welcoming and seating guests, handling take-out orders as well as multiple other duties including fond farewells to everyone leaving. One or two of their granddaughters also help out. It’s definitely a family affair and everyone is so kind and hard-working as they successfully tend to their incredible restaurant. Side note~Terry was born in Atlanta and raised in Marietta on Roswell Road. Love my Georgia connections here and there. It’s a small world!

Terry and his family have lived in Maui since 2012. They chose Maui as the location to specifically open their restaurant. Terry had been plagued with horrendous and painful symptoms due to Celiac for years. Once all of that was figured out, and you know how long of a process that is!?, he has been symptom-free since going completely gluten-free! No cheating folks….it’s serious! 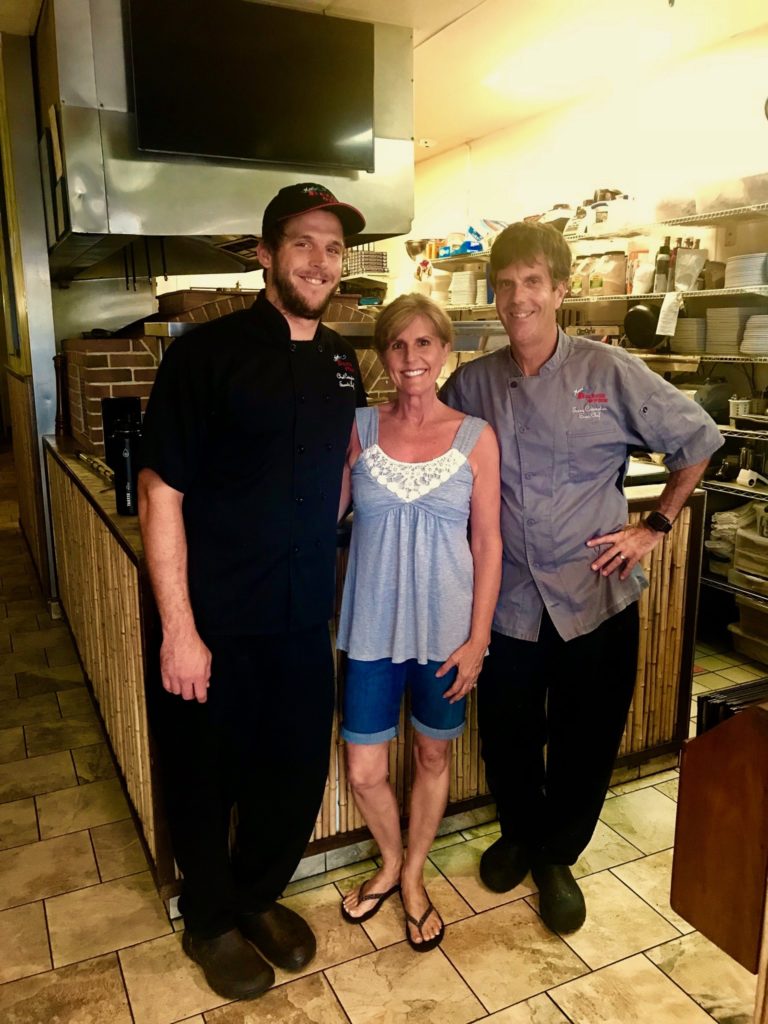 To be able to eat in a completely ‘safe’ gluten-free restaurant is a HUGE unexpected discovery for me! It’s an amazing feeling of being cared for and spoiled at the same time! Kate and I were hoping to go back for another meal, but unfortunately, we just couldn’t squeeze in the drive from Lahaina on another day prior to us heading home. I will just have to look forward to eating at Maui Brick Oven again one day when we are blessed enough to return to Maui! Or better yet, wouldn’t it be wonderful to have this restaurant on the Mainland? Franchising opportunities are available to get Maui Brick Oven in areas near us! It would be great to have one closer than Maui! Interested? Feel free to give Terry a call at (808) 875-7896 for any questions you may have.