One thing that is so incredible with this restaurant organization (OG Hospitality Group) is the charitable donations to their community that has been made since 2007. One charity that really caught my attention was BackStoppers.org. If there is a police officer, firefighter, or licensed EMT who loses their life while on duty, the family is immediately given a check for $5,000 to help with the initial hardship. The giving goes beyond that to scholarships for children, mortgage payments, insurance, and more. Since 2007, these restaurants have been a part of contributing $920,000 in charitable donations to the local community. I am so proud to share this post with you and to remind all of us how important and significant it is to give back.

Shack Breakfast and Lunch restaurant jumped right out to me online when I began researching places to eat gluten-free while visiting in St. Louis. I reached out to the owner, Brant Baldanza, to see if I could interview he and his daughter Hanna while I was in town. Hanna was home from college for the weekend and it was such a pleasure to meet her and her dad. Since opening their first restaurant The Corner Pub & Grill, they have opened multiple locations as well as Shack Breakfast & Lunch. Oh yeah, when we first arrived in town, we decided to begin our St. Louis adventure at the Corner Pub & Grill. It was a smart move……just a gluten-free paradise! Hand-Breaded GF Chicken Tenders, Homemade GF Fried Pickle Chips served with a Horsey Sauce, and GF Cauliflower Parmesan Bites served with Ranch. Having been up and traveling since 2:30 in the morning, this was my Brunch!!! I devoured it! 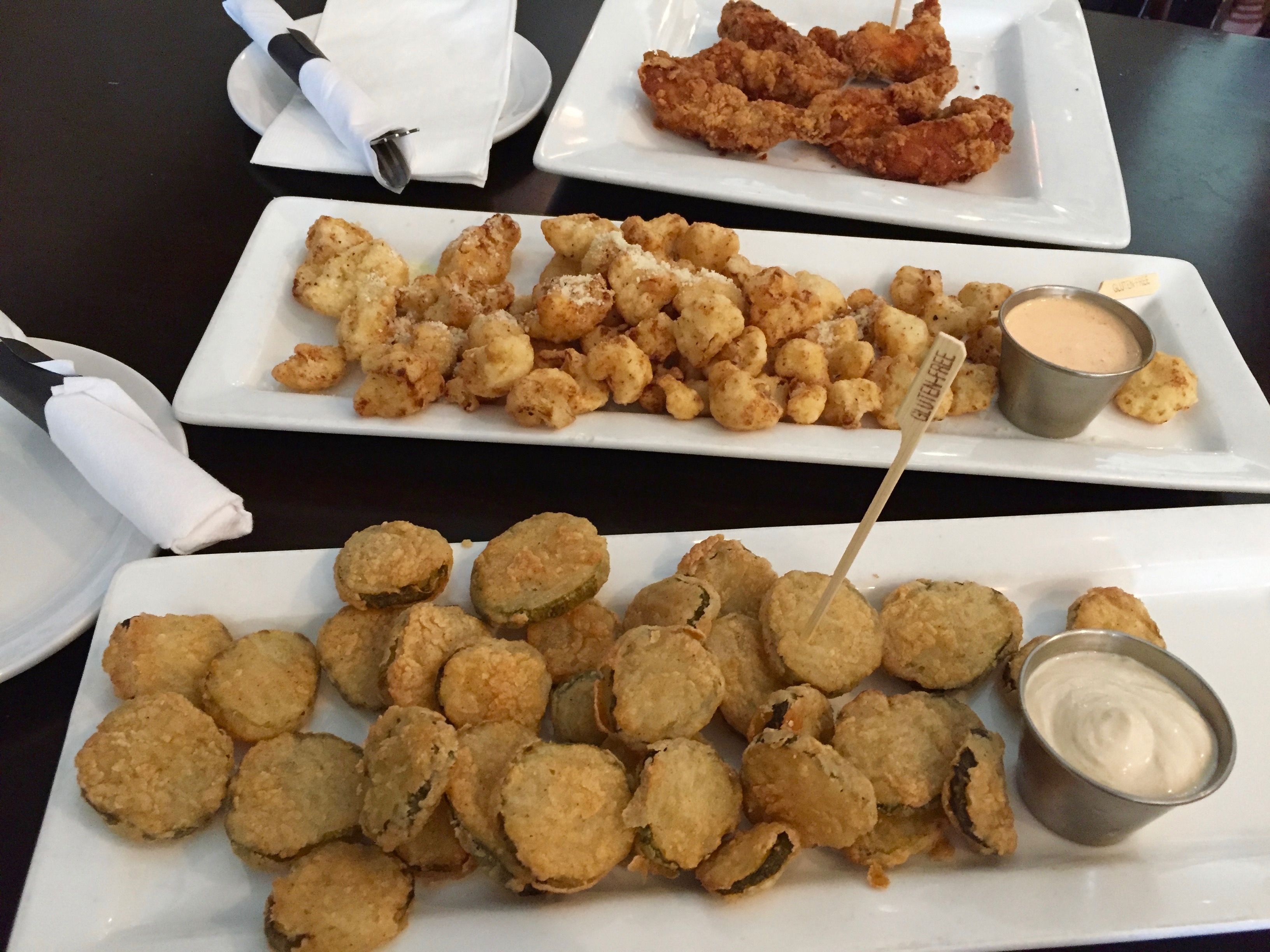 The Chesterfield Shack location has a “commissary kitchen”. That is where they make their gluten-free fried pickles and chicken strips. They are all hand-breaded and frozen. The pickles and chicken are then delivered to the other locations to be fried as ordered. Having a commissary kitchen allows them to be “safe” as they are preparing in a gluten-free environment for those of us gluten-intolerant or with Celiac Disease.
We began the next day, Saturday at Shack Breakfast & Lunch in Frontenac. Bacon??…. I LOVE bacon……. 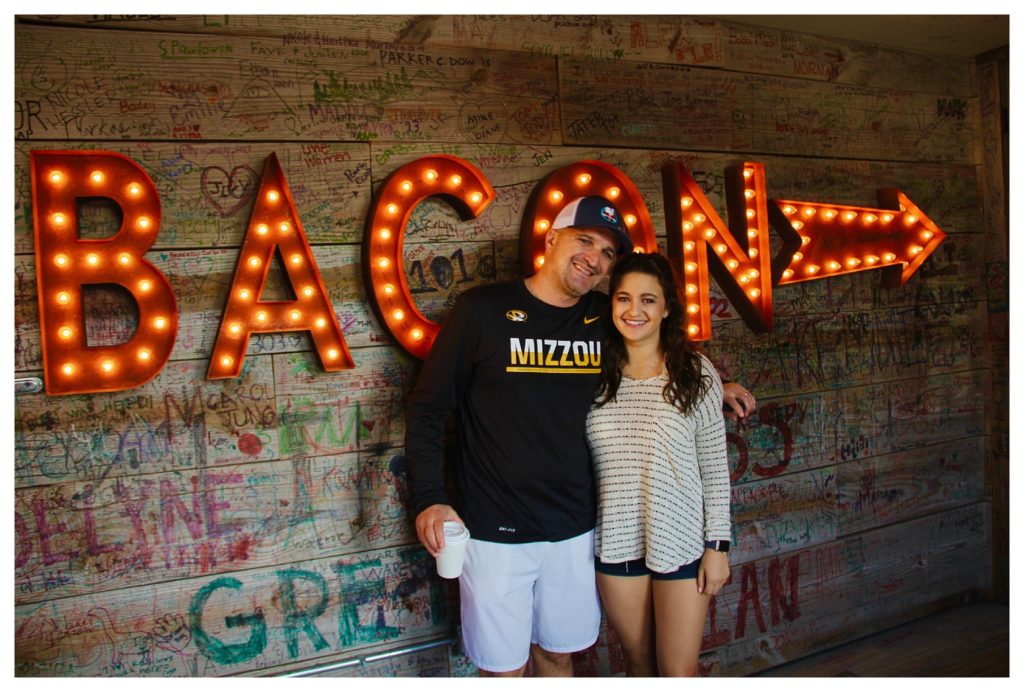 It was a pleasure to speak with her and her dad while at the Shack location in Frontenac. 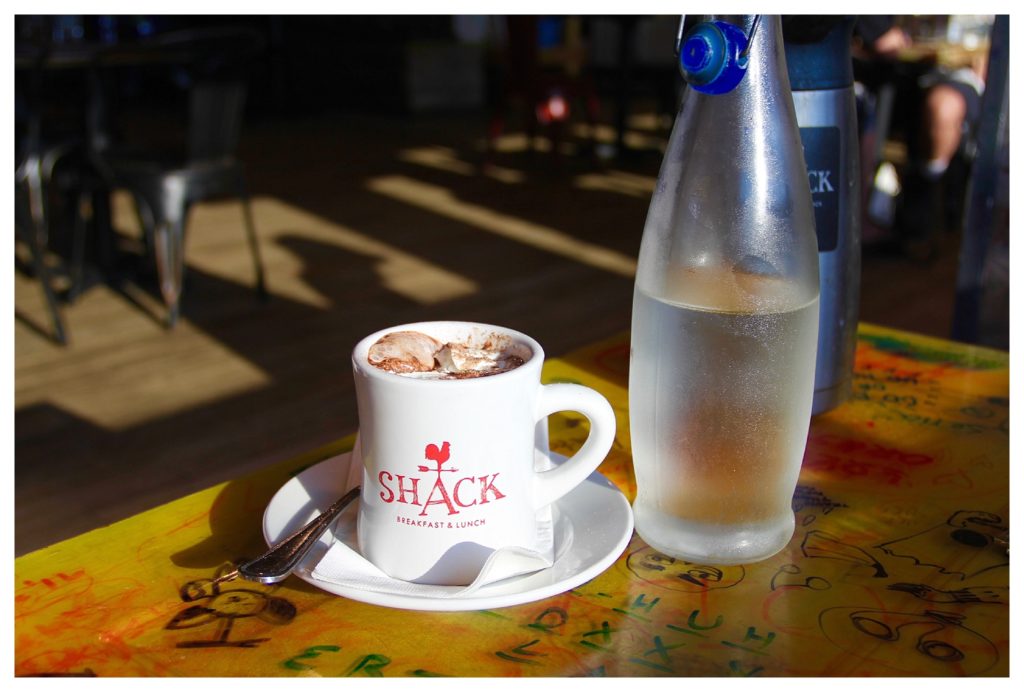 The staff was very welcoming, engaging, and helpful. Allison was the first person we saw when walking in the door. We were met by her sweet smile and personality that was given to everyone she was greeting on that Saturday morning. And it was busy!! Check out the walls and tables….just ask for a Sharpie and write away! 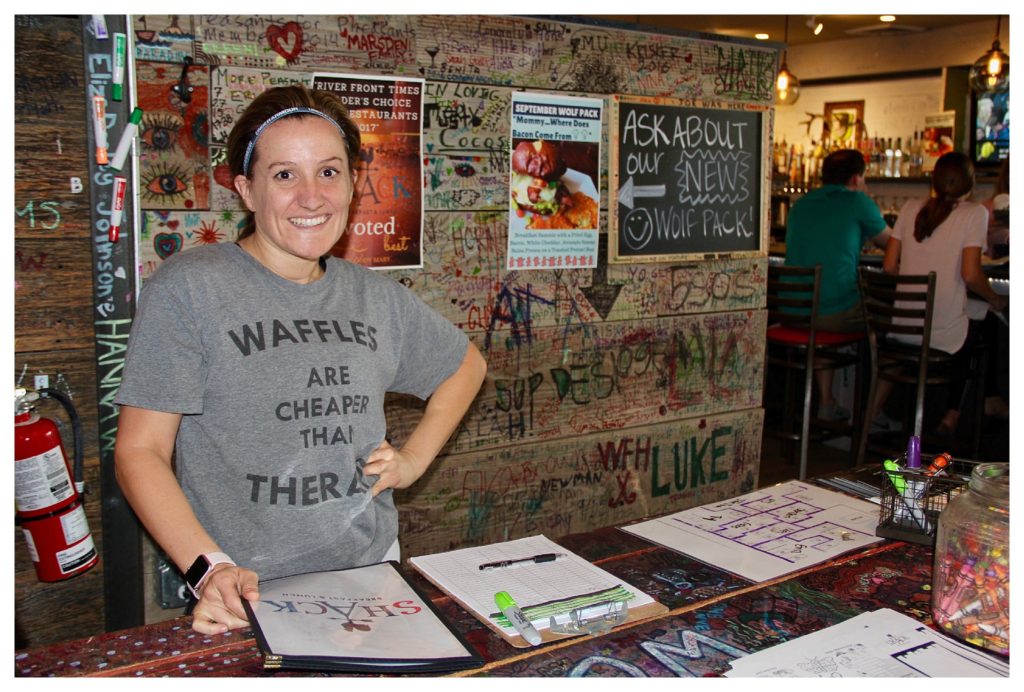 Waffles ARE cheaper than Therapy!!!! Pancakes too!!! Allison was all smiles to everyone who walked in the door. And that was a LOT of people to greet with a smile each and every time! Can’t wait to see you again in the Spring Allison! 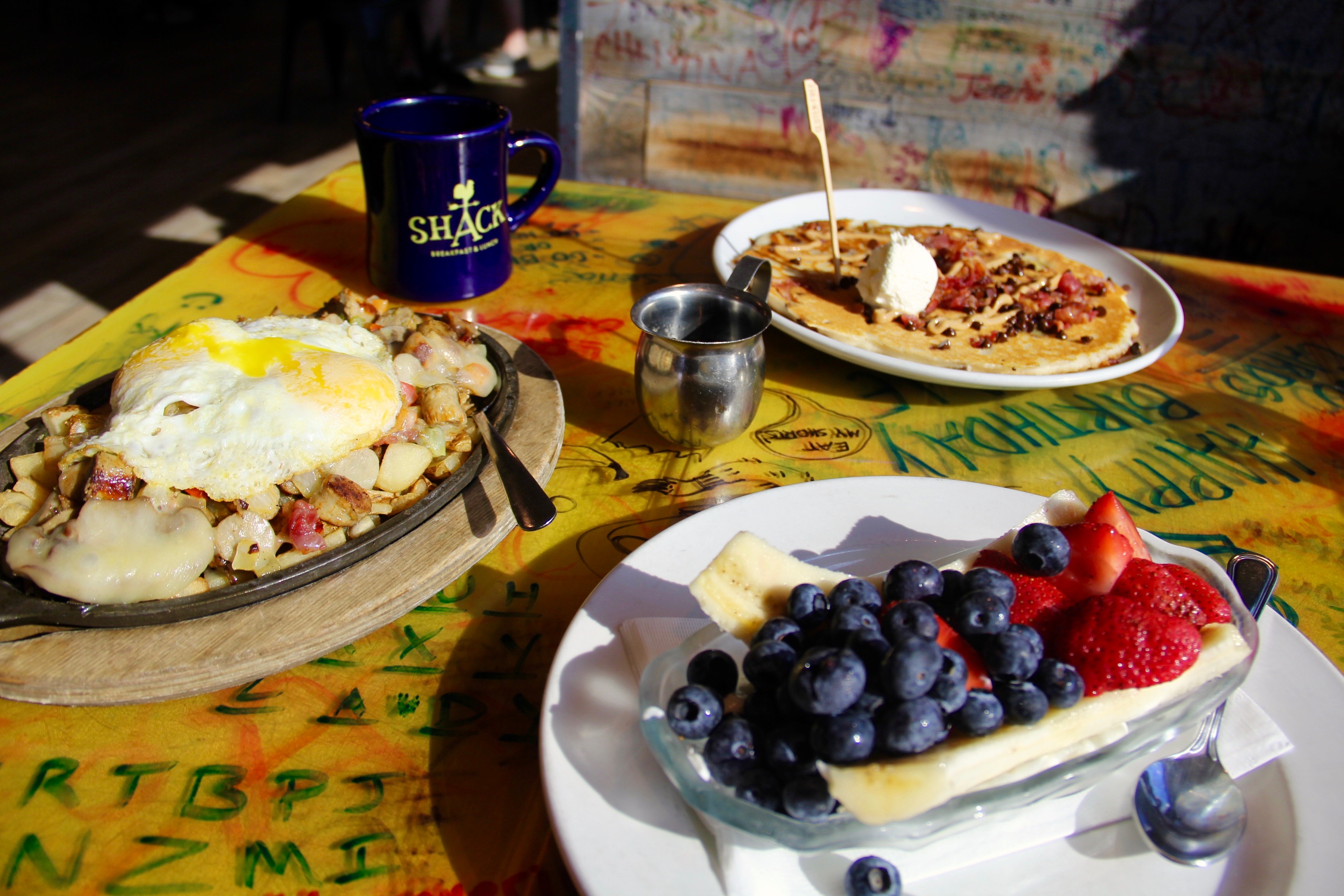 The gluten-free menu at Shack was so appealing and extensive!  It was hard to choose! I decided to order three things that Hubby and I could share. Ok, okay, actually four things~I started off with a hot chocolate. Then got down to the nitty-gritty! A skillet dish Everything But The Kitchen Sink was recommended by Hanna (great suggestion Hanna!), LOVED IT!  The skillet dish included ham, bacon, sausage, mushrooms, onion, red and green bell peppers, and white cheddar! And two eggs. Our waiter Tyler suggested getting the two fried eggs fried so it adds some runniness to the dish. It was sooooo good! The greek yogurt banana split was beautiful and delicious! Everything was so yummy. Nice portions, fresh and beyond fabulous! 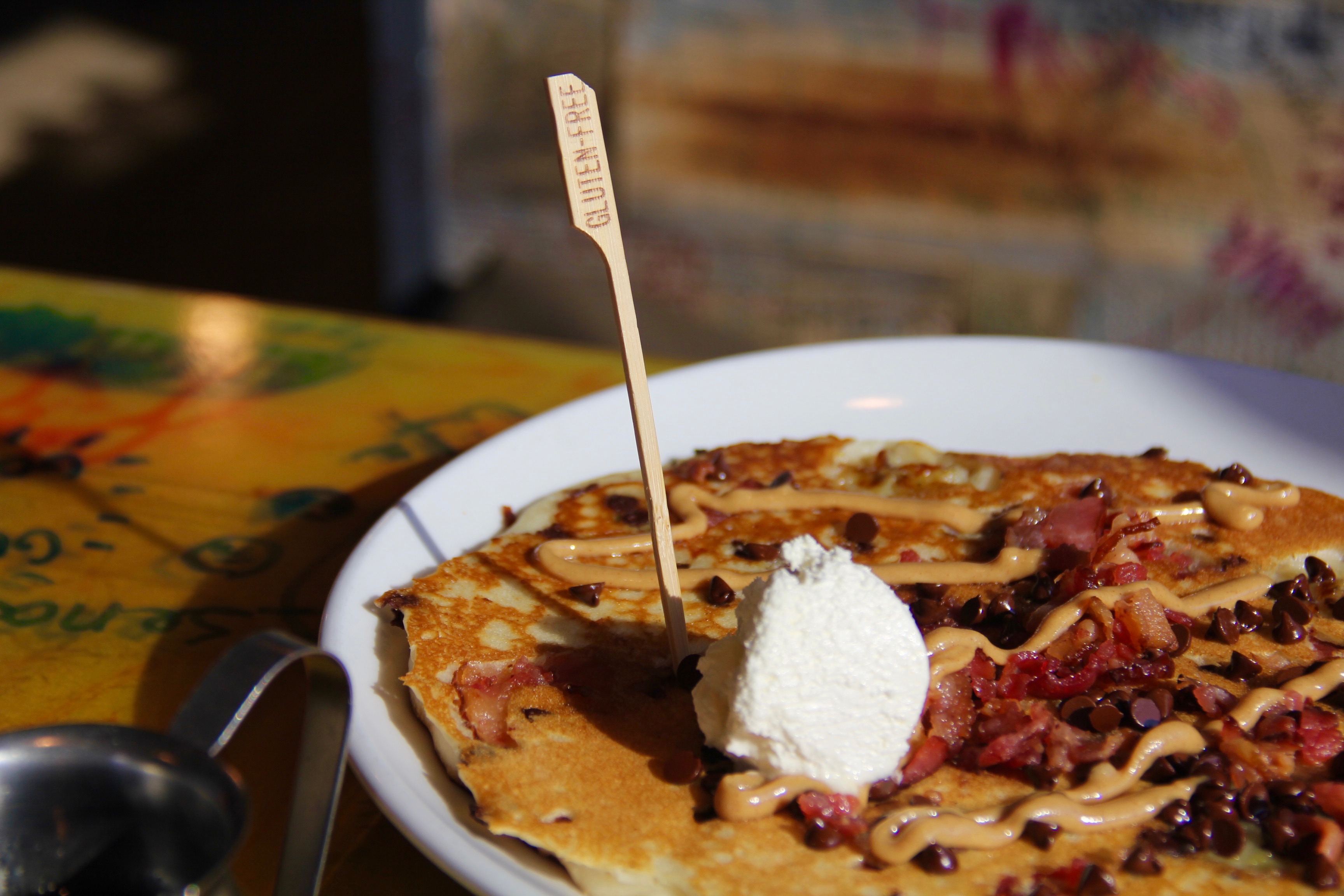 The King Lives Pancake — Holy Cow it was good! A huge GF pancake with bananas, mini chocolate chips, bacon with a peanut butter drizzle, topped with a ball of butter and syrup on the side. This was seriously the BEST breakfast I think I have ever had! Brant, you need to put a Shack in Georgia!! 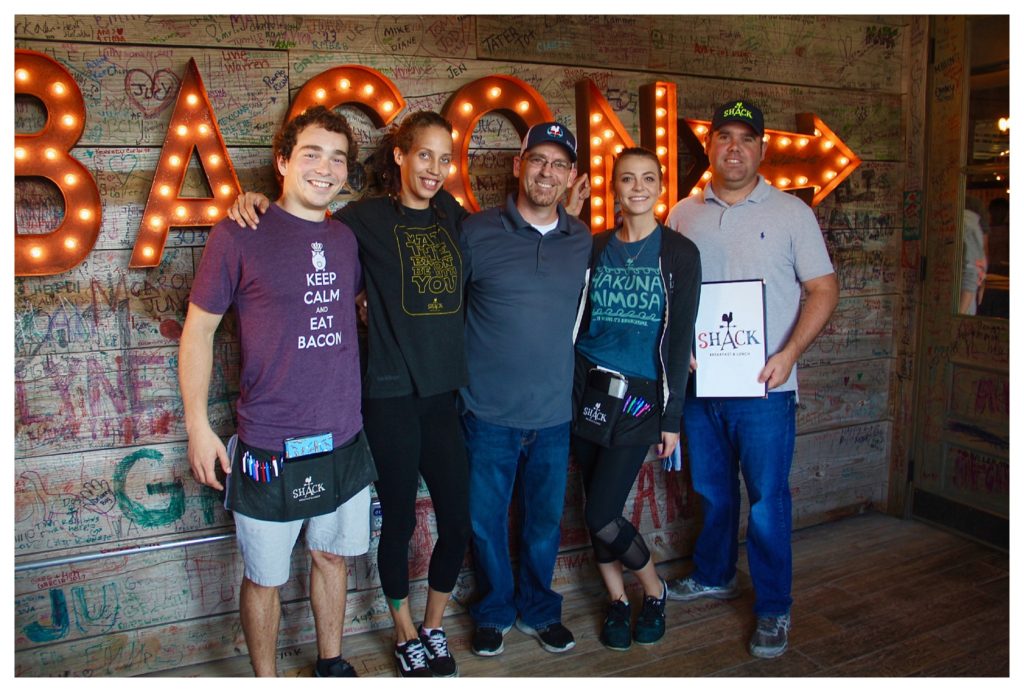 The entire staff was so accommodating and hard-working. The Regional/District Manager John was hustling throughout the restaurant and the General Partner Mike was involved tending to customers and helping the wait staff the entire time we were seated. Great teamwork leads to a successful business! Tyler was a great server, courteous with great recommendations, and just down to earth. 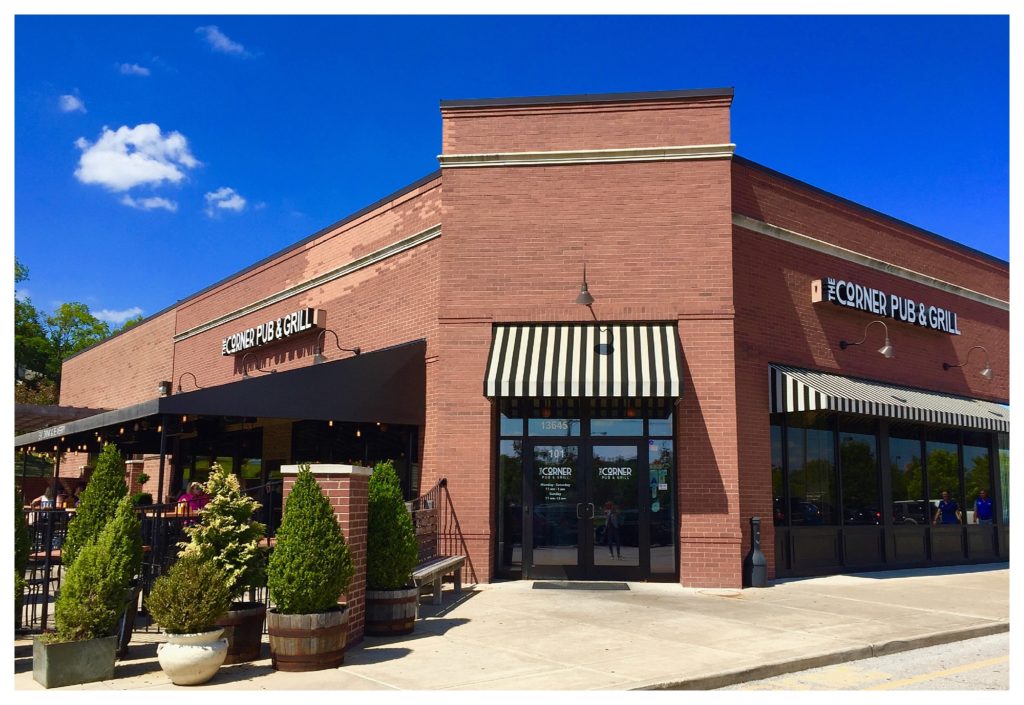 Hubby and I decided to eat at The Corner Pub & Grill once more. I ordered the seasoned Bison Burger on a gluten-free bun along with french fries. As soon as I saw the bun I realized it was going to be delicious. Then as soon as I squeezed it and felt how squishy it was, I was completely delighted because I knew it was going to be perfect! The burger was so good and the fries were perfect. Delish! You know how hard it is to find good GF bread! And to have fries to boot, I was in heaven. I have to admit, I began the meal with more GF fried pickle chips, just because I could!! 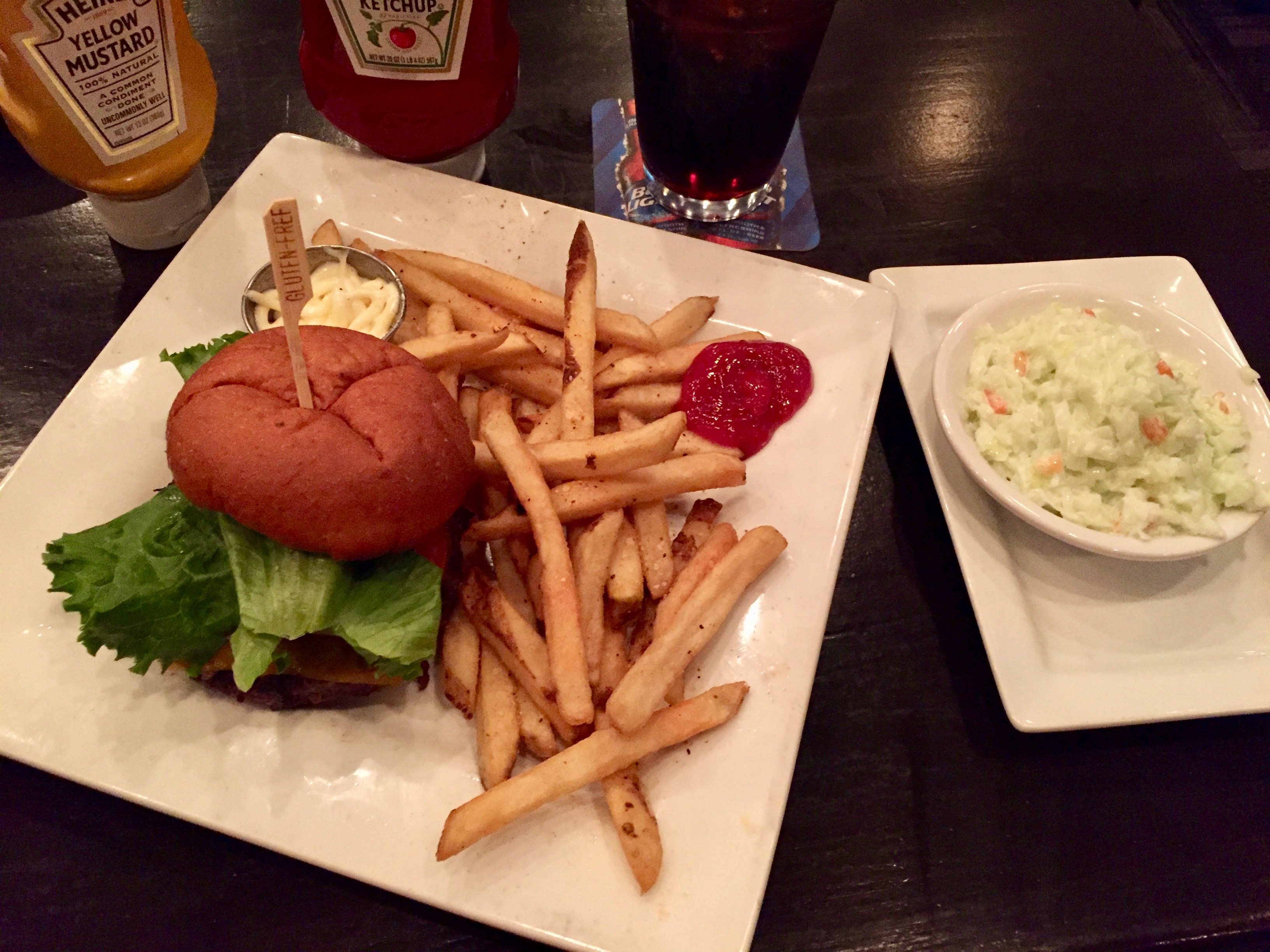 ALL of this food was nothing short of one unexpected discovery after another! I cannot wait to pop back in the Spring for my fill of more gluten-free foods at The Corner Pub & Grill as well as Shack Breakfast & Lunch. Look for more locations coming soon Missouri friends and watch out Denver! I really think Atlanta should be on the “list”! Honestly, my weekend was made in St. Louis because of this wonderful food!

Eating my way through St. Louis (and feeling like Miss Piggy!)