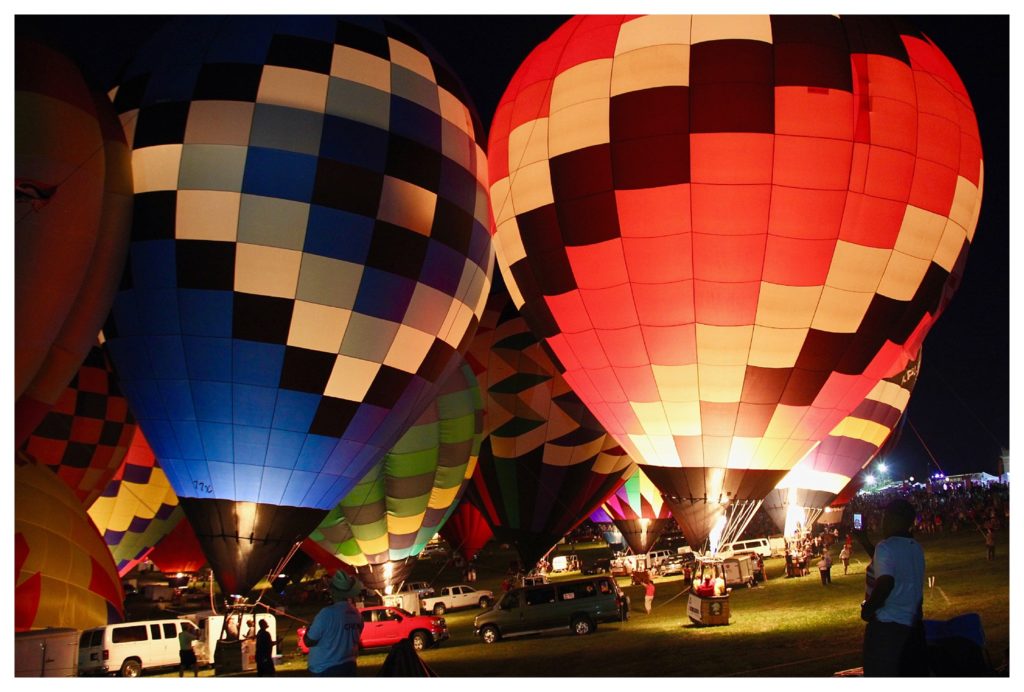 When Hubby and I went to the Great Forest Park Hot Air Balloon Race, St Louis MO, last weekend, we were so impressed by the 60 hot air balloons that were participating. Friday night was the traditional Gaslight Glow when all participating hot air balloons light up their balloons each and every time at the specific sound of a signal. It was beautiful to see them all glowing at the same time. Some of the lighter-colored balloons were much brighter than the darker shades. This was the first time we had attended a Gaslight Glow. Just beautiful! The Gaslight Glow is a taste of what the next day is going to bring with the crowds of people in attendance as well as looking forward to seeing all of the balloons taking off, one right after another. All of the vans/trucks and trailers all belong to each of the balloons and their teams. 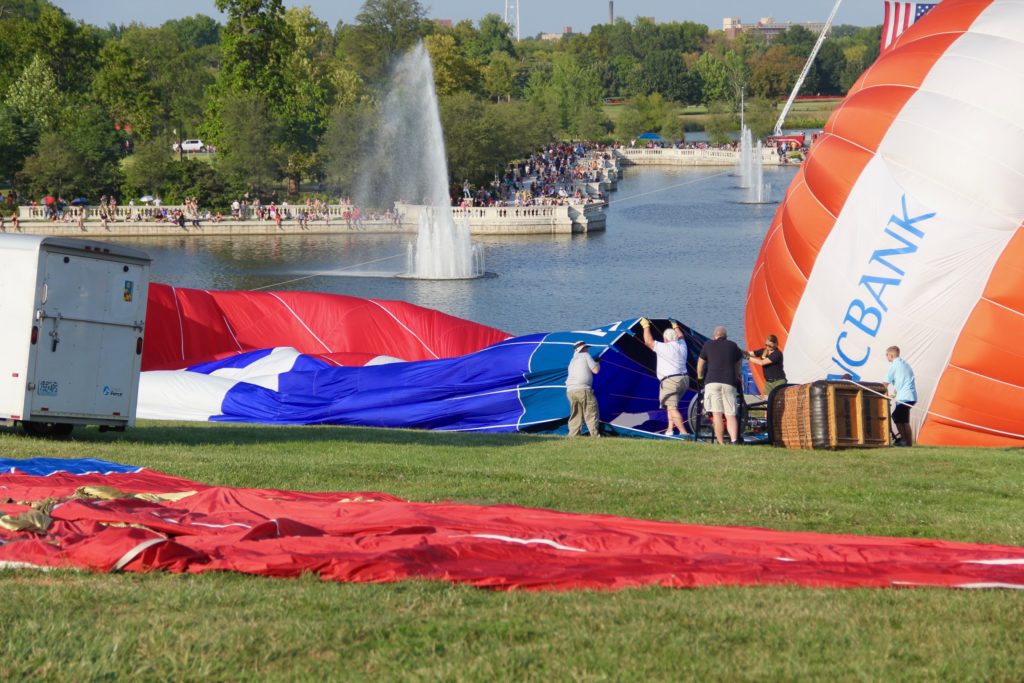 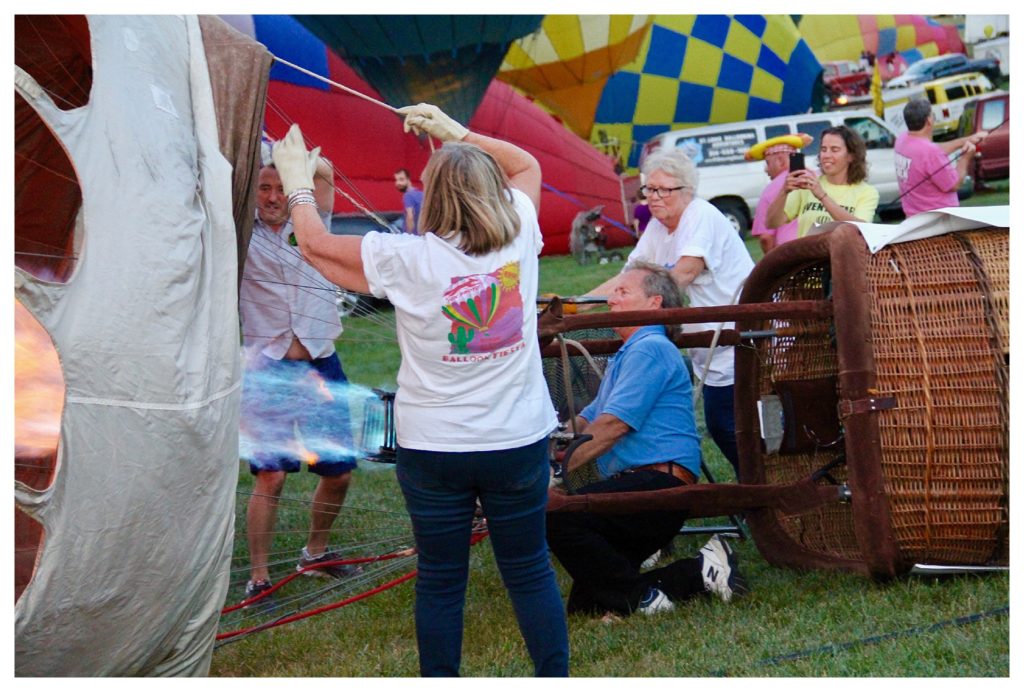 Tom’s Niece Deanna and her husband Paul help Tom with various duties. Deanna is a retired Weapon Systems Officer (WSO, pronounced “wizzo” for those of us with military knowledge). She was an air flight officer directly involved in all air operations and weapon systems of the F-15E. She retired as a Colonel, with lots of flight time logged in and deployments after 25 years in the Air Force. Thanks for your service, Deanna! 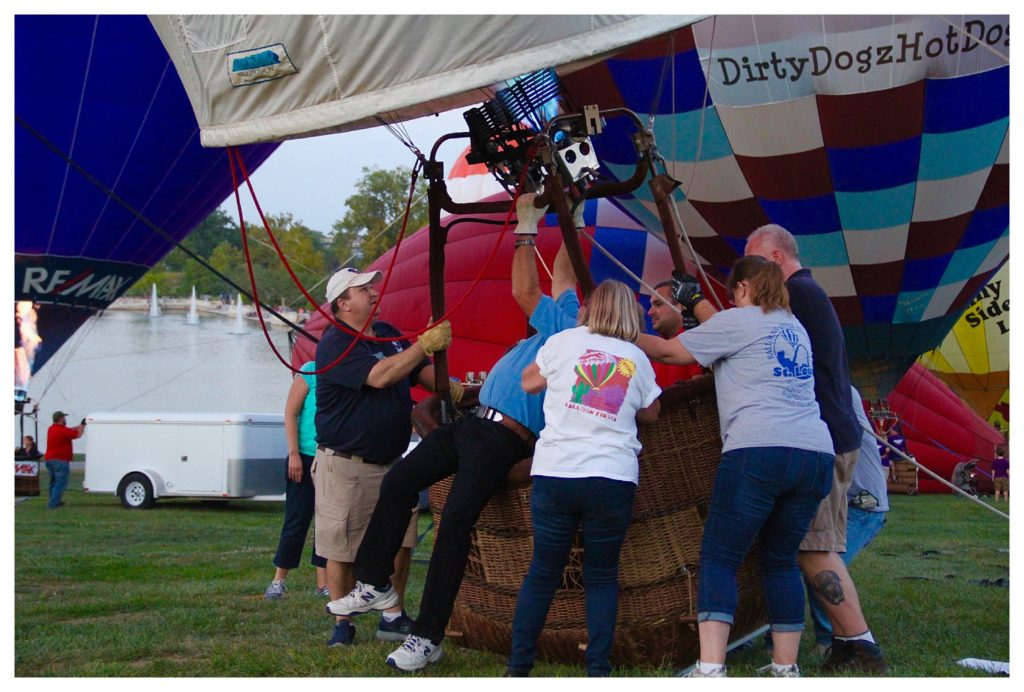 While it was still light, I was looking around at all of the balloons laid out on the ground, this particular balloon caught my eye. And then when it was all blown up, I thought it was just beautiful, sort of a back in the day beauty. The gold fabric draped around the balloon just added so much character. I decided then that I was going to approach the pilot the next day to ask for an interview. I knew based on his name tag that the pilot was the one in the blue shirt. I couldn’t wait until the next day! 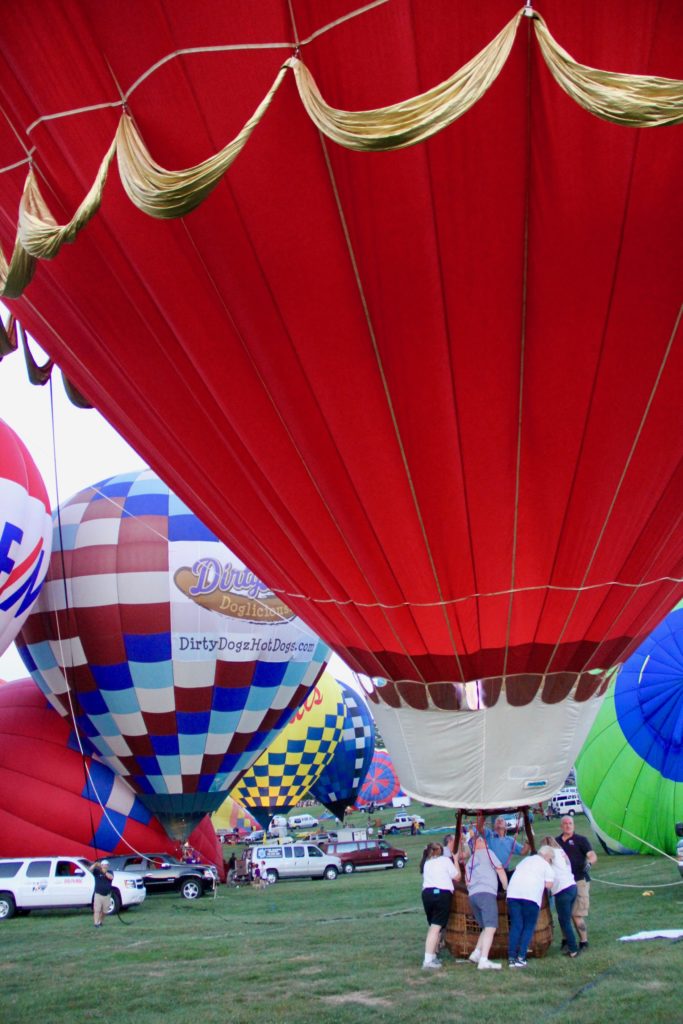 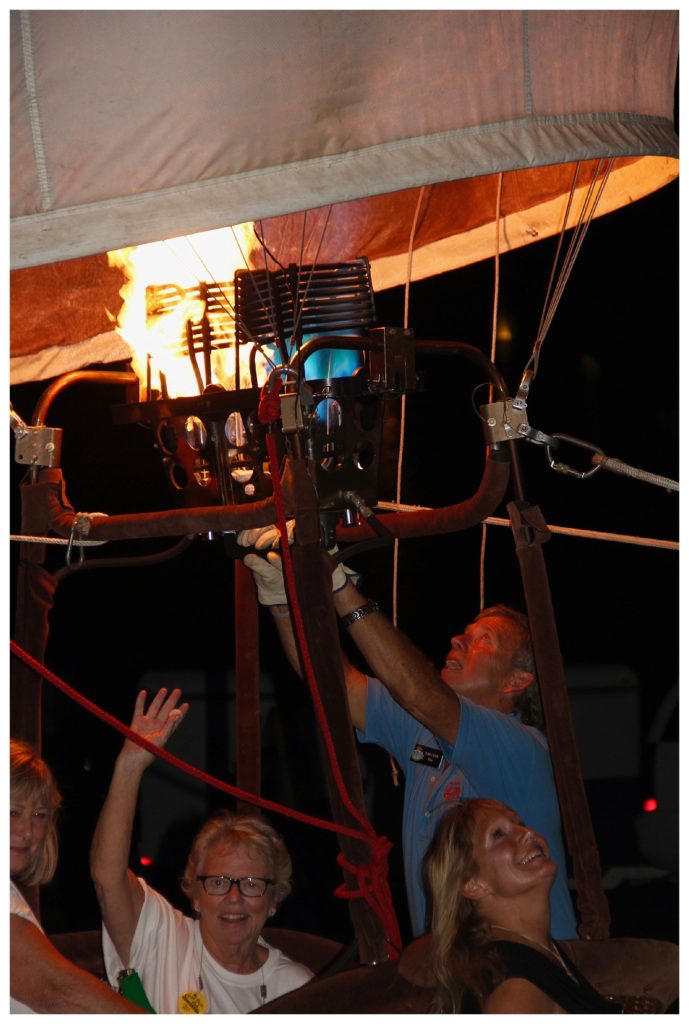 Tom Caton graciously accepted my request for an interview. Tom definitely has a passion for piloting his hot air balloon.  The name of his balloon is Time Traveler which is so fitting for the design of his balloon. He is from the St Louis area, House Springs, and has been participating in the Great Forest Park Hot Air Balloon Race for 32 years. Tom told me that there is no big prize for this race. Apparently, the winner’s name goes on a trophy that is displayed in the Missouri History Museum in Forest Park. Their name is then added to the race website as the winner for that year. The event is more for fun than competitive for the pilots. They so rely on each other and each has specific jobs to do on Friday night and again on Saturday. When the balloons are being blown up, they could quickly just take off into the air, unless the basket is being weighed down. Even then when people are standing up or sitting down in the basket to weigh it down, it still pops off the ground a bit. Everybody’s job seems so important and they all seem to know what to do to help as part of their team. He said that the camaraderie is so special at this race. I could definitely see the special friendships and community within each balloon team.

Tom’s cousin and brother have been balloon pilots since 1976 and they are actually the ones who enticed Tom to become a balloon pilot as well. Tom has been licensed since 1985. This weekend is like a family reunion for them. His cousin was actually the lead balloon at the race on Saturday. Tom’s brother was entered in the race along with Tom. 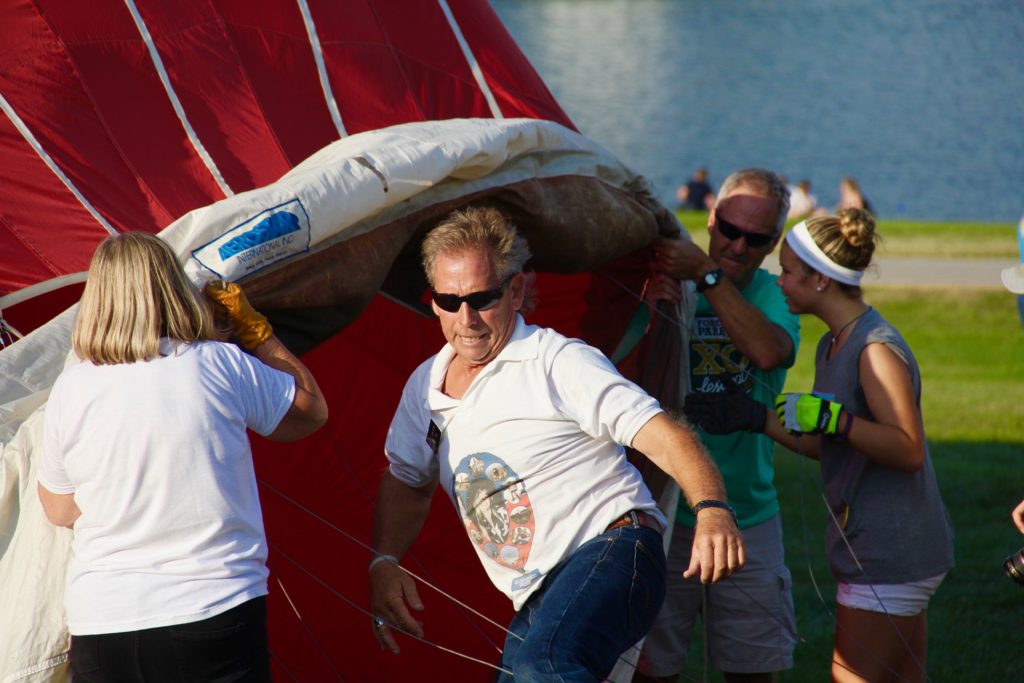 Tom is hustling around in and out of the balloon as his team assists with the blowing up of the balloon. The winds were really making it difficult. The wind plays a huge part in the launch and flight of each balloon. Saturday was a very windy day and an event staff member mentioned to me that she thought some of the 60 pilots decided not to participate in the race this year due to the windy conditions. The race was delayed a bit due to the winds. Tom mentioned that the race couldn’t delay too late, because FAA requires them to be on the ground by sunset. So the launch and landing of each balloon needed to be completed before the sun went down. 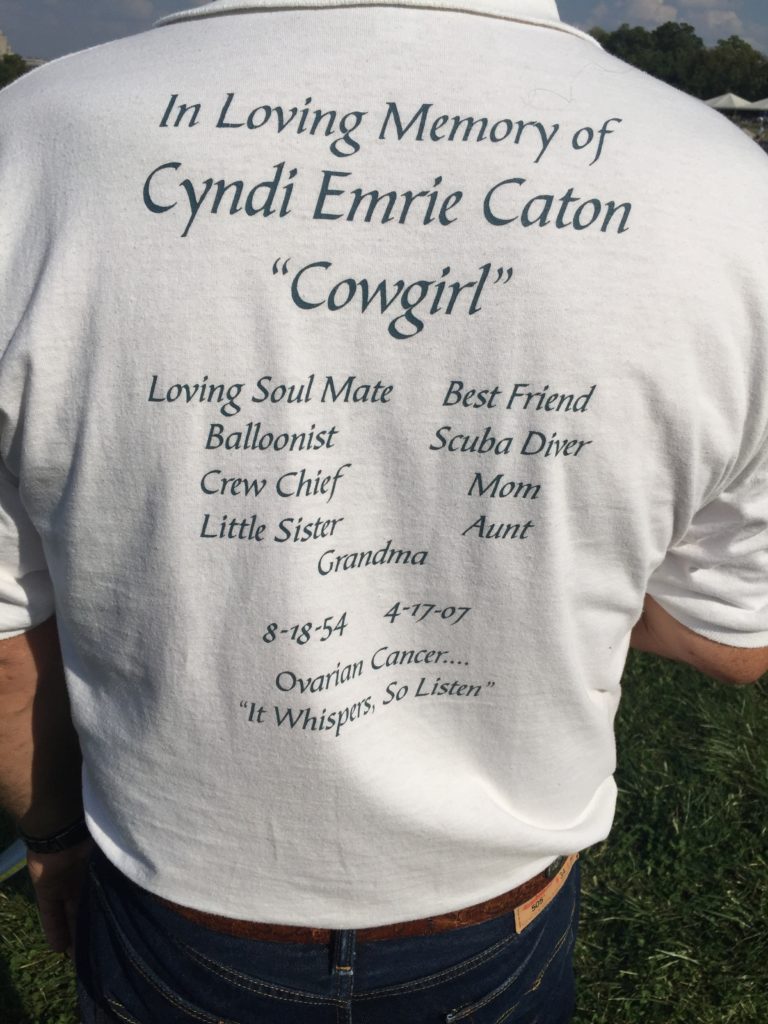 The City of St. Louis does a fabulous job of hosting the pilots, according to Tom. It’s a special event for him every year. His wife Cyndi was his crew chief for many years. Tom shared their treasured story with me. He knew his wife his entire life from childhood on and some years after college they met up again and had 25 wonderful years together. Cyndi passed away 10 years ago from Ovarian cancer. Tom and Cyndi enjoyed hot air balloons, scuba diving, motorcycles, and the many close friendships that developed from those activities. A sweet friend made up a special t-shirt for Tom to wear during this race in honor and memory of Cyndi. I thought the shirt was so meaningful and that this would probably be the year that Tom wins the race because he was doing it with his wife in mind!

Prior to launching, each balloon pilot is given a plastic baggie full of sand. Each pilot must write his name on the baggie. The pilot tosses the baggie, from their airborne balloon, onto the ground as close to the X where the lead “hare” balloon landed. The baggie that comes closest to that X is declared the winner. 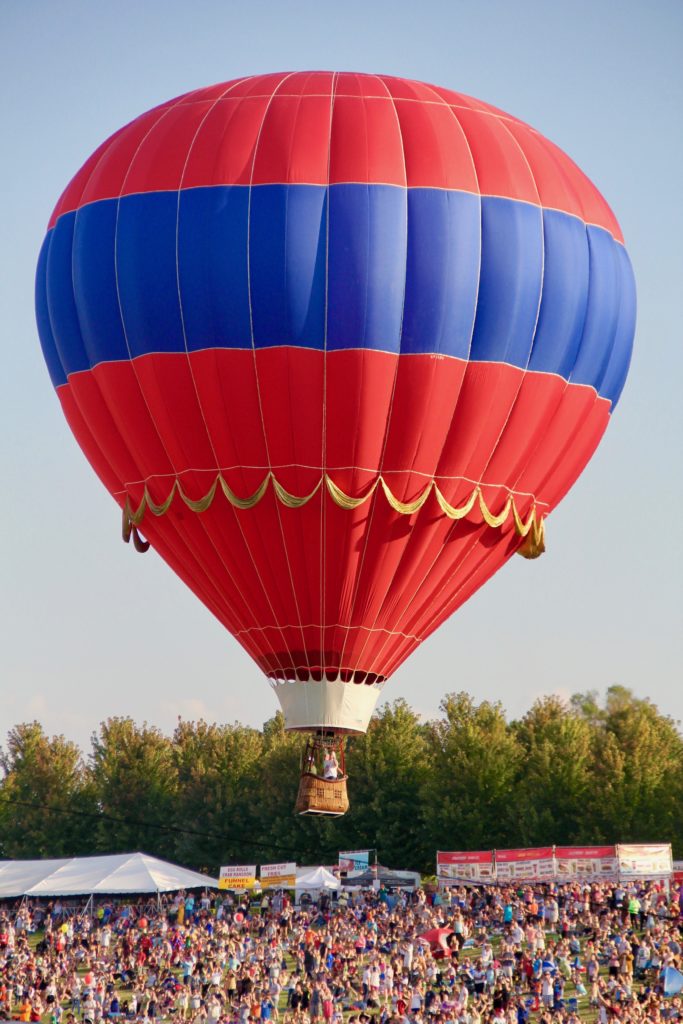 It was exciting as each balloon launched. The crowds begin cheering and clapping as each and every balloon begins to lift off. The balloons are so beautiful as they are floating off into the sky. They are incredibly quiet and peaceful as they float above everyone. It’s just magical seeing all of them fly off one by one. They are just beautiful and majestic! 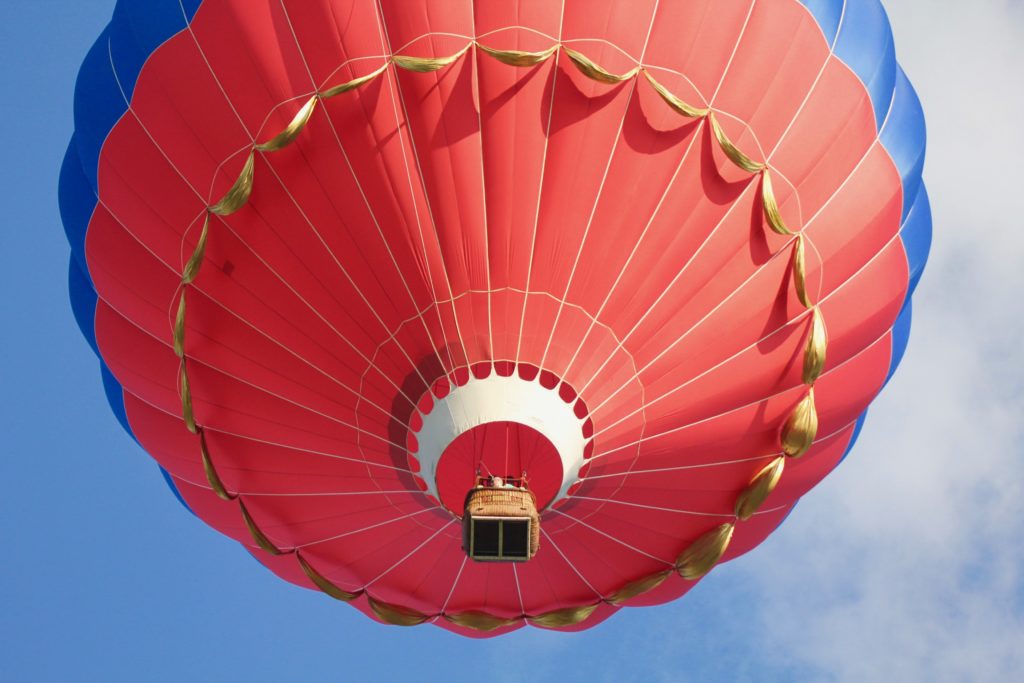 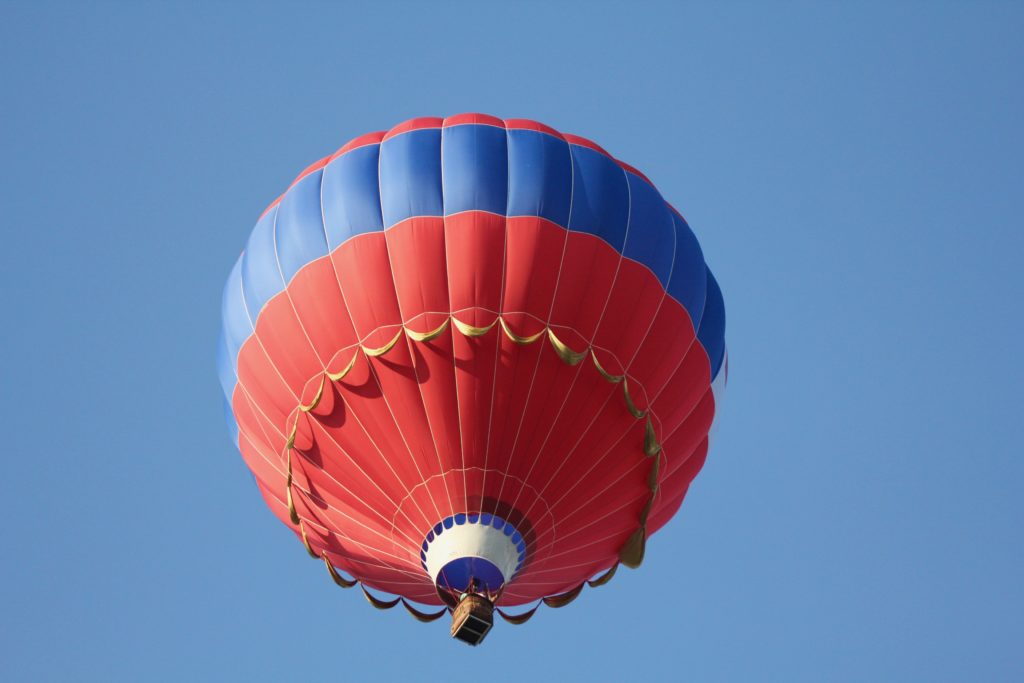 The “hare” balloon takes off first and then the “hound” balloons follow. The balloons all wait for all of the race participants to be in the air before the official race begins. The balloons typically fly about 30 miles away from the take-off location. Tom’s balloon is the one on the far right in the photo below……. 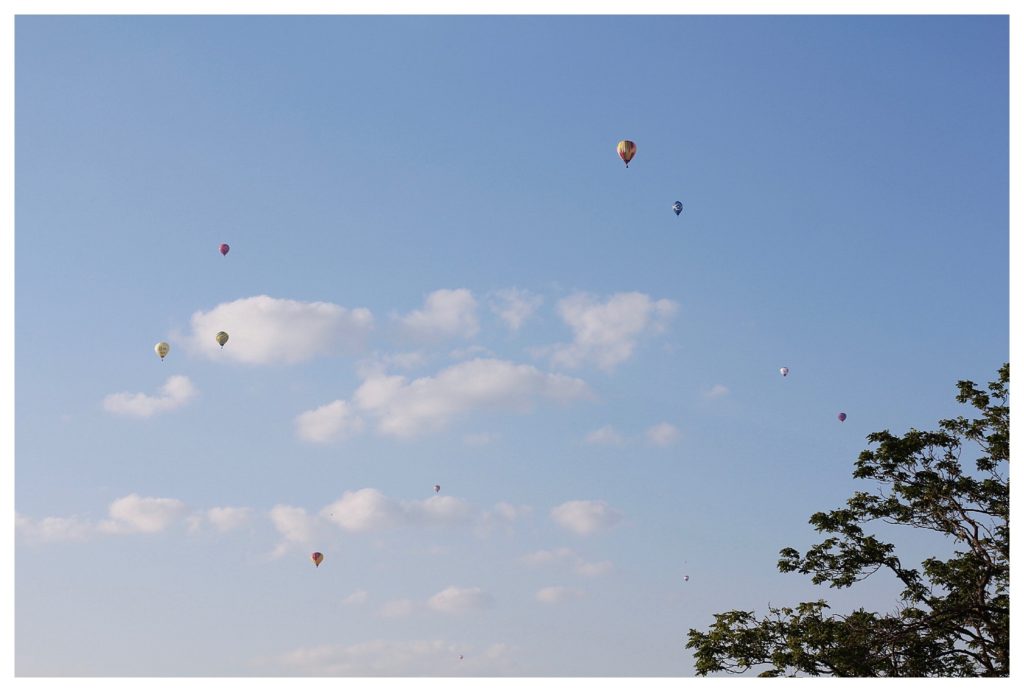 Well………guess what!!!? Tom won the race!!! How exciting it was to look online the next day to see his name as the winner of this race! I knew his balloon was special! His hard work as well as the rest of his team definitely paid off.

If you are interested in seeing 450 hot air balloons at one time, as well as seeing Tom with his balloon, check out the Albuquerque International Balloon Fiesta in Albuquerque New Mexico October 7-15, 2017. This will be Tom’s 5th year participating in the Balloon Fiesta. They advertise balloon rides, fireworks, morning glows, laser light shows, and a mass ascension! According to their website, they launch them a bit at a time. Now that would be some pretty spectacular photos! A HUGE burst of spectacular colors in the sky. It’s on my list!!

Keeping my feet on the ground this time,